Is it just us or did the Canberra version of Sydney’s Ivy Pool Bar literally just hit the market in Woden Valley?

A quick comparison of the infamous Ivy Pool Bar on Sydney’s George Street and the pool of this residence in O’Malley side-by-side is a little breathtaking. It has us crossing our fingers that a successful Canberran who LOVES a party – we’re looking at you Jason Roses and Beth Larsen – will snap up the 780sqm home. 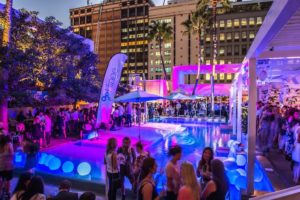 But at $4.995m, it’s more likely to be purchased by an executive or diplomat currently living in or new to Canberra.

Sales consultant Richard Luton is running press and online ads in Sydney in the quest for a buyer, whom he says is likely to be an executive with a family who requires space for formal and informal entertaining. 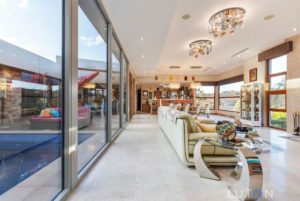 “The buyer we’re looking for will appreciate the extent of quality and additional features, like extra space under house and an additional second kitchen – suitable for extended family or staff,” Luton says.

The four-bedroom, four-bathroom gated mansion was built in 2012 by current owner Dr Yarub Jamiel. The home is built around the heated 20m pool and spa on the outskirts of O’Malley on Dalman Crescent. 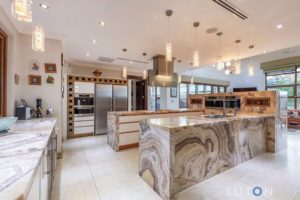 The main bathroom features a grand two-way design and direct access to the pool’s “courtyard oasis”. The home also features a garaging for four cars and a circular driveway with two separate driveway entrances.

One wing of the home is an entire master suite, with a balcony, large internal window facing the courtyard, fireplace, his and her access to a double ensuite with bath, and his and her walk-in-robes. A guest suite is located in a separate wing. 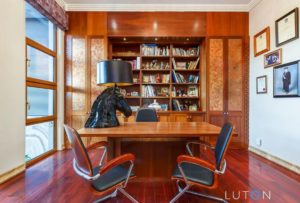 According to Luton, the new owner can expect to live next door to either a doctor who works at The Canberra Hospital or a diplomat.

“O’Malley’s a unique suburb,” he says.

“It’s very much a family suburb within close proximity to schools, Woden, Parliamentary Triangle, but it also offers peace and tranquillity with its backdrop.”

58 Dalman Crescent, O’Malley, is for sale with Luton Properties Manuka. Viewing by appointment only. View the listing on Zango here.