When you invent an app designed to help deliver your car home safely after a few tipples, surely it’s because you enjoy a few beverages and a spontaneous night out in Civic yourself?

The siblings behind PKUP – the Gonzalez brothers – laugh at this question.

“I’ve only had to use PKUP once while I was partying,” younger brother Josh says, sipping on earl grey tea (he no longer drinks alcohol and doesn’t drink coffee either).

“I was out with mates and wanted to get my car home. I think the drivers were a little freaked out that they’d actually picked up the owner of the app.” 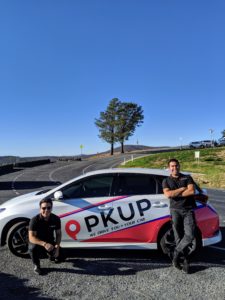 The Gonzalez brothers with their first branded car.

Older brother Oscar Gonzalez doesn’t drink so has never had to call himself a driver.

While Josh admits the idea for PKUP came to him after a big night out in the city – “I was on a bus, just sweating and hungover, going to pick up my car, and I thought, ‘There must be a better way to do this’” – he and Oscar will spend a big part of 2020 educating Canberra that PKUP is more than just the transport solution for a boozey night out.

Since the app was founded in late 2016, PKUP has facilitated more than 15,000 trips in Canberra – “we don’t call them rides, we’re not in the same category as Uber or Ola” – mostly for people needing to get their cars home on nights out.

This year, a significant marketing campaign around simply “booking a driver” will be undertaken, for the range of places it’s difficult to get your own car home from, like the airport and the hospital.

“The medical industry is also a big one for us, where people drive to hospital but for some reason, are unable to drive themselves home,” Oscar says.

But the biggest opportunity, according to the Gonzalez brothers – lies in car servicing. Yes, that’s right Canberra, with PKUP you’ll be able to book a driver to drive your car directly to you after it’s been serviced.

“Mechanics don’t want their car parks full of cars that have already been serviced,” Josh says.

“They want to get them out as soon as possible. So we’ll come along, we’ll get the car, take it back to the client at their work or their home.” 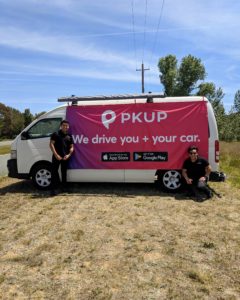 This year, PKUP’s services will expand to include delivering your car directly to you after it’s been serviced.

The technology behind PKUP has been almost exclusively funded by the Gonzalez brothers themselves since the app launched three years ago. Mum Morena, dad Oscar and sister Adriana often help out with driving when demand is high.

The brothers both studied at ANU – Josh studied economics and Oscar studied engineering – but were always entrepreneurial. They launched many businesses as teenagers – “we were always just trying to make a buck” – and were flipping cars when the idea for PKUP was born.

Some of the stories from PKUP drivers are hilarious.

Like the time a driver was called to Pialligo Estate to collect a couple and their baby from a wedding.

“The man got in with the baby and some flowers and said, ‘Hang on, my wife is saying goodbye to some people’,” Josh explains.

“And of course, when she came out, she was the bride.”

There was also the time he was called to The Canberra Hospital by a new mum to drive her and a set of hours-old twins home in the car in which she drove herself to hospital. (He’s unsure where the father of the twins was.)

“We’re a technology company, living in a city that fosters and promotes innovation and we’re having a great time,” Oscar says.

To get in touch with Josh and Oscar directly, head to Instagram (@joshgonn and @o.scygm) or Facebook (@joshandoscar).