It was the pink beacon that once drew partygoers to Civic from pre-drinks as far afield as Chisholm Tavern, Belconnen’s Blind Beggars and the Tourist Hotel in Queanbeyan.

The neon sign announcing you’d arrived at glorious, seedy and infamous nightclub The Private Bin hasn’t been seen hanging in the Sydney building since 1999.

But here at C! News, we’ve managed to track it down. 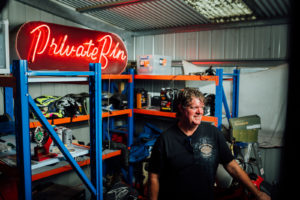 The iconic beacon at its new home. Photo: Rohan Thomson

The sign lives just over the border in a giant shed come mancave in Royalla, and is now the property of brothers Lane and Cade Brian, who fight over it endlessly. It lives on Cade’s rural property but it was Lane who rescued it from certain destruction while working for signwriting firm Empire Signs in the late 1990s.

Fyshwick-based Empire Signs, owned at that stage by current Hellenic Club boss Stef Pashalidis, received a devastating call from owners of the Bin in late 1998; the Bin was closing, undergoing significant renovations and being transformed into a fancy new nightspot called ICBM. 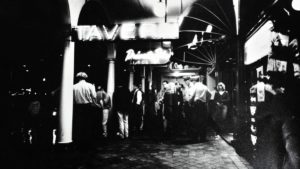 “We took the old signs down – the Private Bin sign and the old heartbeat neon signs at Upstairs Bin,” Lane Brian recalls.

“I mean, they were iconic. By the time we got to them they were in pretty bad shape and very, very fragile.

“Going into the club in the daytime was actually quite interesting – I’d only ever seen it at night. It definitely smelt like a nightclub, even during the day.

“I remember seeing the wall smashed in [between the Private Bin and next door venue Waffles Piano Bar] and thinking, this is it. This is the end. The Downstairs Bin rabbit warren we all knew and loved will never be the same again.” 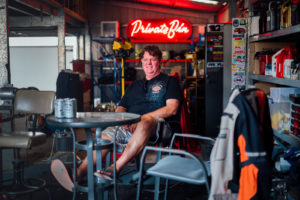 When Lane Brian joined the AFP in 2001, he’d go from managing larrikins at the Bin to partying there in a single night.

The Empire Signs boys set to work making new neon letters for the new venues – an I, C, B and M specifically – as well as a new sign for Upstairs Bin, which was being re-branded as a dance club called ‘Insomnia’. The neon i on the name Insomnia was a real work of art, Brian recalls.

“Our neon bender at the time Warren Bevan said, ‘Look, with Insomnia, we can make something quite special with the top of the i, and make it light up as a trace’ and the owners were just going, ‘Hell yeah’.”

It was the end of an era and the beginning of a new phase of Canberra nightclub glory. 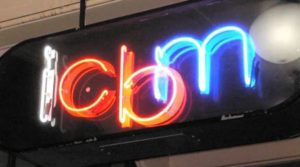 New neon was made for the club replacing the Bin. Photo: Facebook

The new signs went up in the Sydney building and as the newer, more expansive ICBM officially opened its doors, thousands of partygoers mourned the loss of the dirty, dirty Bin.

The Empire Signs boys were avid Bin-goers and took it upon themselves to restore the hot pink neon sitting in dust on the warehouse floor back to its late 1970s glory. (There were actually two neon Private Bin signs that sat back-to-back in a glass case – Brian took one home, and neon bender Warren Bevan took home the other.)

“It was nostalgia,” Brian says. “I wanted it at home as a way of saying thank you for the memories.

“I remember hundreds of people just lined up out the front of the Bin under the pink glow of that sign; including me as a teenager.

“I’d paper-plane an old paper drivers licence down the row after using it to fool the bouncers.” 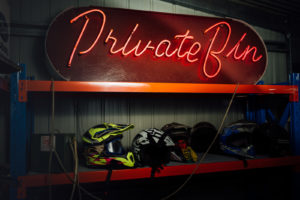 While thousands would love to own it, he’ll never sell, Brian says. Photo: Rohan Thomson

Nowadays, the iconic sign still casts a glow over many a late night brouhaha featuring a few too many Jim Beam and Cokes and people dancing to tunes like Eagle Rock and Knock on Wood.

It’s just that the parties occur in a shed in the bush about 20km past Tuggeranong.

“People walk in and they just can’t believe it,” Brian says.

“They go, ‘oh my God the Private Bin! I used to go there all the time!’ and they take a snap and put it on Facebook.

“It’s a great conversation starter, it’s a great backdrop, it sets people at ease, it sets the mode for a party.

“It’s still got the partygoers underneath its glow and they’re the same people who loved the club – it’s the same crowd, and it’s like we never left.”

Will Canberra ever see the glowing fuchsia icon on eBay or even Buy, Swap, Sell?

“The happiness that sign brings and the way people react is worth everything to me.”