‘Some have been my close friends’: Life as a funeral director in your hometown

‘Some have been my close friends’: Life as a funeral director in your hometown

Jason Codey and I are catching up at a friend’s 40th, matching drinks in hand, talking about our early years together at the primary school we both attended.

I don’t hear his phone ring over the noise of the party, but it must be buzzing in his pocket because he excuses himself with his mobile phone to his ear, a single pointer finger in the air to apologise.

I’m on the dance floor when he returns to the party about an hour later. I spot his re-entry and leave Nelly hanging mid-way through Country Grammar to ask Codey where he disappeared to. 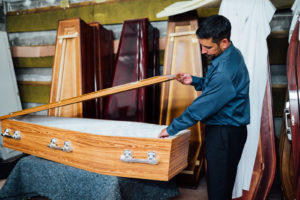 A former wardsman at Calvary Hospital, Codey says he fell into the funeral industry ‘by accident’ in 2014. Photo: Rohan Thomson

“A woman, unfortunately, she passed away under very unfortunate circumstances … in the bathroom.”

While I’d been busy doing an excellent Beyonce impression on the dance floor, Codey had been at a four-bedroom brick home in the Queanbeyan region, transferring the body of a woman into the back of a mortuary ambulance.

“But why didn’t they take her to the hospital?” (I’m still freaking out).

“If someone’s declared dead at the scene, there’s no need for a hospital. There are other processes in place.”

Codey heads to the bar to grab a well-earned drink. 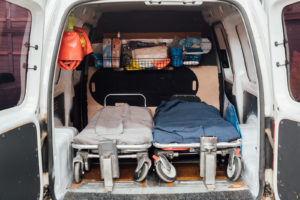 It takes me a long time to come to terms with this conversation. I think about it for weeks. I know Codey works at funeral home M.H. O’Rourke in Queanbeyan but I’ve never considered the reality of being someone who’s called when a person dies. I selfishly think how I’d feel if I had to even look at the body of a deceased person, let alone then manage – is that the right word? – them through to burial or cremation. I’d be traumatised for life.

And then there’s Codey, returning casually to the party, mingling with friends as though nothing’s happened.

I convince Codey – a former joiner and father of three – to sit down with me to talk about what it’s like to not only run a funeral home, but to live there too. 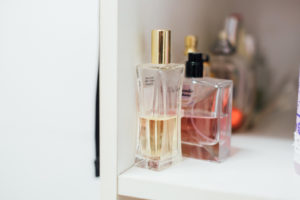 Families bring in bottles of perfume when a body is being prepared because ‘they want mum to smell like mum’ Codey says. Photo: Rohan Thomson

You see Codey, his wife and their three boys live in the 120-year-old home attached to the M.H. O’Rourke funeral parlour on Crawford Street in Queanbeyan. The boys jump happily on a trampoline just metres from the mortuary where bodies are cared for, and the family’s “back door” opens onto a coffin showroom; cedar, chipboard or gold plating? Take your pick.

Granite and marble headstone samples, six in total, line the side of the house, along a path leading to the backyard. Upright slabs commemorating your life in love-heart, semi-circle and gable shapes.

It’s completely normal for this family – and the stuff of nightmares for the rest of us. 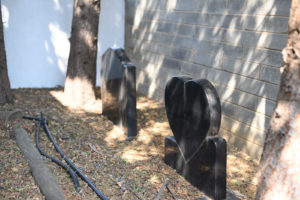 Headstones on display at the side of family’s home. Photo: Rohan Thomson

“When starting in the industry, the first body was hard,” Codey admits. He’d had experience as a wardsman at a local hospital and had witnessed numerous people pass away in a hospital setting. But moving the body of a person who’d died in their own home – and had sadly not been found for several days – was a different experience.

“It was sort of midnight-ish. The gentleman had passed away in bed, however, he’d been there for a few days, which was not ideal,” Codey recalls.

“Unfortunately not everyone passes away at home surrounded by loved ones – some die alone.

“I wasn’t prepared for it. I felt devastated. The police – who had more experience than me at that point – were very supportive of me as a newbie and very relaxed and calm about the situation.

“Now when I look back, I can only thank them for their support.” 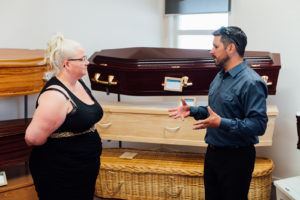 Jason Codey talks me through my coffin options. I like the basket. Photo: Rohan Thomson

Having trained as a joiner, a young Codey would have been more likely to have built you a custom coffin than to be in the business of selling you one. He was building window frames and doors for the clients of construction companies in his hometown when he “accidentally” fell into the funeral industry in 2014.

“It wasn’t something I was looking for,” he says.

“But I’d done some casual work for M.H. O’Rourke and they were looking for a new manager. After meeting the owners at the time, for the first time, they were happy with my ethics and attitude and gave me the option of a full-time position, which just happened to be the manager’s position.

“Scary stuff, but here we are.”

As a local lad, it’s not uncommon for Codey to collect and care for his own good friends and other people he knows. It’s the challenge of working in the town in which you were born and raised. Codey’s job is to collect the body and transport it back to M.H. O’Rourke, where the deceased are held and cared for until funeral arrangements have been made. 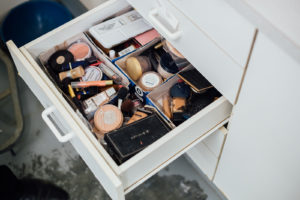 A drawer full of makeup used in the preparation of bodies. Photo: Rohan Thomson

There have been a couple of jobs that have kept Codey awake at night.

M.H.O’Rourke has the coroner’s contract for the Eden-Monaro region. This involves the police and any incidents that require a coronial investigation.

“I got a vague phone call that there had been a car accident down Cooma way,” Codey recalls.

“And sometimes when the police call they don’t have all the details from the scene. They do their best to provide up-to-date information to us as the contractors.

“But there was a fatal accident, and someone had passed away at the scene.

“So I arrived on-scene and it was only then that I was informed that it was a child who had been fatally injured in the accident.  The same age as one of my sons.

“I didn’t have time to mentally prepare. It was a 2.5-hour drive and if I’d known I could have prepared myself and my co-worker, who had a sister the same age.

“The more detail you can get initially, the more time you’ve got to prepare, but sometimes these things can’t be helped.” 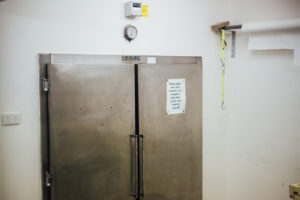 It’s the “Unknown number” calling in the dead of night that worries Codey the most. It means not only has someone died, but the police are in attendance.

“You’re immediately thinking, “Oh God I hope I don’t know them. I hope it’s not horrific,” he says.

“If it’s a nursing home calling, then they’re older and that’s easier. Not easy, but easier to accept than someone who’s died unexpectedly.

“But when you get a private number and they say, ‘Hi Jason, it’s Constable So-and-So’, you’re like uh-oh, and your heart drops.

“Cancer in young people, accidental and unexpected deaths with children and friends – that’s the most horrendous part of my job.” 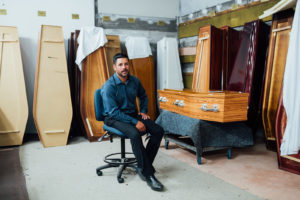 ‘You’re not going to escape it. It’s going to catch up with you eventually, no matter who you are or from where you’re from – it’s the cycle of life. Let’s just hope that the funeral director treats you with the dignity and respect that we/you/I deserve.’

Codey’s sons aren’t scared to live close to the dead. His eldest son was initially “shy” to say he lived at M.H. O’Rourke but got over that pretty quickly. I ask Codey’s son if the place is haunted and he laughs and says no.

But when his son leaves the room, Codey leans in close and whispers the details of two unexplained occurrences.

One, when his youngest son was a toddler, playing outside in the yard.

“He pointed to the carport area and kept saying, ‘That man is there! There’s a man there!” Codey says.

And a more personal and terrifying experience Codey still can’t explain to this day.

“I was cleaning the laundry room,” he explains.

“It’s been there for about 100 years and used to be the staff amenities room.

“So I moved everything out from the walls – the washing machine, the dryer, a huge set of lockers we have in there and swept and mopped behind them all.

“When I came back, about four hours later, everything was placed back in its original spot.

“It freaked me out. I thought well one of the staff members has been down there but they all denied it – and were as freaked out as I was.”