It’s not uncommon for Canberra lawyer Sarah Whiting to rush back to work after a long lunch break, swapping gold dancing heels for flats and completely covered in glitter.

The 25-year-old legal eagle works across litigation, commercial matters, building disputes, contract matters and family law by day – and an in-demand pin-up model and dancer in her spare time. 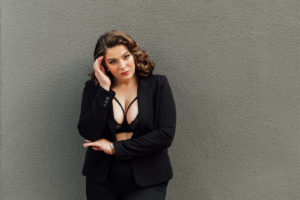 She’s worn bras for Sydney-based Storm in a D Cup, Running Bare activewear for Sportsmans Warehouse, “scrunch bum” leggings for Perth brand Marvi Collection and got her glow on for tanning foam creators Tan Tootie. And that’s the past 12 months alone. 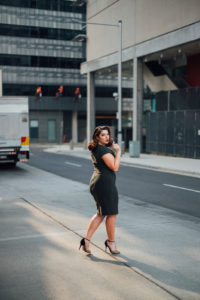 “I’ve always loved the look of Marilyn Monroe and just classic pin-ups and then as soon as I got out of school, I discovered [burlesque performer] Dita Von Teese and I was like, ‘Oh, hello. Who is this woman?’,” Whiting says.

“She’s got dark hair and pale skin like me. She wasn’t the blonde hair, blue-eyed, tanned skin, California girl – she manufactured her own type of beauty.”

Maintaining her curves is a combination of “eating burgers” – Brodburger is her fave, naturally – and the ferocious cardio that comes with being a samba dancer at Kokoloco Dance Studio. She’s also a burlesque performer and teacher: “It’s wild – I have a grandma in my class who absolutely kills it. Her seven-year-old granddaughter came to watch her perform.” 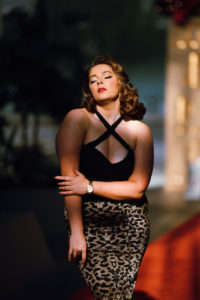 Whiting was inspired to study law as a student at Merici College. Photo: Rohan Thomson

The Samba dancing is the reason she often returns to work after lunch, shimmering with glitter.

“I’ll perform at an event or a corporate function and then return to work in full makeup, hair and glitter,” she laughs.

“My bosses don’t even flinch, they’re used to it.”

Between drafting contracts and financial agreements, and setting up wills and estates, Whiting manages an Instagram following of 65,000. She shares notes with fellow lawyer and social media influencer Enrica Wong, who showcases pre-launch makeup products to a following of 22,000 globally. 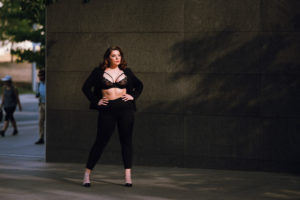 In between meetings and projects, Whiting’s managing an Instagram following of 65,000. Photo: Rohan Thomson

But Whiting is farewelling her “work wife”, her family and her hometown soon to head to New York. She and husband Peter, a local primary school teacher, are relocating to the Big Apple after a love affair with the city that began in 2017.

The size 16 beauty will attempt to score work as both a lawyer and a model in New York.

Fronting the camera for US-based brand Savage X Fenty (the lingerie line of singer Rihanna) is her dream.

“Bella Management has a few sister agencies on the ground in New York, so the plan is to fingers-crossed introduce myself, and let them know I’m now a local,” Whiting says.

“It would be a dream come true to model in the States.”