Why a psychic medium never wants to know their own future

Why a psychic medium never wants to know their own future

In May 2019, Canberra psychic medium and construction worker Steven Paul rolled his right ankle on a worksite and broke it in three different places. He’s been unable to work ever since – enduring surgery and months of physiotherapy.

For skeptics, it begs the question: if he’s a psychic medium, didn’t he know this was going to happen? Couldn’t he have opted to stay home from work that day, bingeing Netflix and downing Tim Tams? 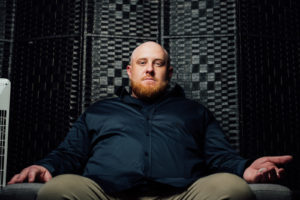 ‘I think it’s a skill we all have,’ says Paul of his mediumship. Photo: Rohan Thomson

If a psychic medium spends hours reading the futures of clients every single day, surely they know the intimate details of what’s set to transpire in their own lives?

That’s a resounding no, Paul says.

He receives flashes of information and ‘knowings’ but never, ever deliberately probes his spirit guides for information on his kids, his relationships or what he hopes will be a future as an internationally-renowned psychic medium.

“I could be driving the car, I could be washing the dishes, I could be doing some mundane stuff, and when I’m least expecting it, information [about my own life] will get fed through,” Paul explains.

“And later on it happens.

“The reason I don’t try to read into my own future is because when I’m reading, I have to be extremely objective.

“In my own life, I may want something to happen a lot, so how can I be objective? It’s like, am I reading this? Or am I forcing my own projections onto it?”

Paul has big ambitions. He reads for clients locally and across the globe around 10 hours a week – Skype sessions are his preferred way to read – from his garage in Jerrabomberra.

But he wants to seriously up the ante. He’ll start reading for groups of 10, then 20 and eventually huge theatres of people the way world-renowned psychics John Edward and Long Island Medium Theresa Caputo do.

Like Edward and Caputo, Paul doesn’t use tarot cards, crystal balls or other “psychic tools” for reading – instead downloading information from his own personal spirit guides. He partly sees, feels and “just knows” things about and for his clients.

Some people are nervous to sit in front of him. 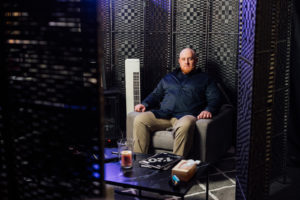 Paul in his reading room at home in Jerrabomberra. Photo: Rohan Thomson

“They’re afraid they’re going to hear something they don’t want to hear,” he says.

“I tell them upfront: I may say some things today that will make me unpopular with you, but that’s not my problem. If I do my job correctly, you’re going to say, ‘Wow, he’s good at what he does. I didn’t like what he said, but he was absolutely right’.”

Thanks to hindsight, Paul now knows he was psychic even as a child. But it took the death of his mother Elaine in 2014 for him to fully acknowledge and embrace what he calls his “skill”.

“All the best mediums have been touched by death, that’s the trigger event,” he says.

Being a medium takes a huge toll on Paul, who’s exhausted after a day of reading and often finds it hard to sleep at night thanks to “psychic debris” and a head that spins. 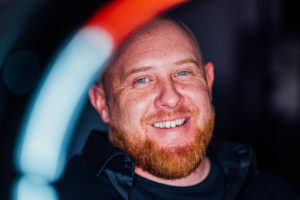 Paul says his ankle injury was ‘a slap in the face’ from the universe to live his true calling as a medium. Photo Rohan Thomson

He describes being able to talk to spirit guides as both a blessing and a curse. Some members of his family refer to him as a devil worshipper.

“It depends on the day you catch me – some days I feel absolutely blessed to be able to sit here and honoured that people trust me consistently to come and sit and allow me to do what I do,” he says.

“And then there are other days, where you know you’re paying a price. Your own family has turned against you, you’re exhausted from spending time in other people’s energy.

“But ultimately it’s a skill. And, I do believe this is what I’m meant to be doing, corny and cliche as that sounds.”

To book a reading with psychic medium Steven Paul, head to his Facebook page or email stevenpaulpsychicmedium@gmail.com