Welcome to your very first day of Tindergarten, Canberra.

I’m your teacher, Holly. I have a degree in early childhood education and I’m an expert in online dating.

Hang up your backpack, get settled in and let me school you on the 7 things you’re doing wrong on Tinder.

1. Only having one photo. 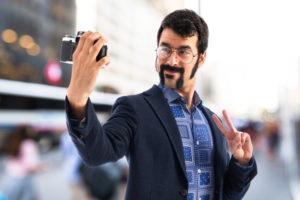 Sure, include this photo, but make sure there are others.

This is the number one reason I won’t swipe right on someone. How can I possibly gauge whether I’d like to stuff my face with a Kevin Bacon burger at Milky Lane with you if all I have to go off is one dimly-lit pixilated bathroom selfie? Are you a catfish or just camera shy? Is this reflective of the effort you put into each and every area of your life? I’ll never know because I’ll never swipe you. 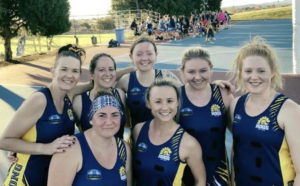 Can you tell which one’s me? Are you going to Google ‘Googong Hogs Netball’ and find my other, hotter, friend, second from right?

If you’re going to advertise your VL Commodore on carsales.com.au, are you going to post a picture of it in a car park full of other Commodores? Up against potentially newer models with shinier rims, paint jobs and ‘fluffy dice’ hanging seductively in the rearview mirror? No you’re not.

This is Tinder people, not a game of Guess Who. Ladies, I’ve heard this A LOT from men too so reserve your Sharon Strzlecki netball pictures exclusively for Facebook. Sure it’s good to know that you play darts on a Tuesday night, but keep group shots to a two to three person minimum, please. Preferably where you are the centre focus or are looking more attractive than your mates.

The last thing you want is me searching Facebook for “Queanbeyan darts teams” to find out who your hot mate is. Which you know… I’ve obviously… probably never done… 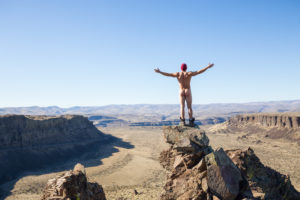 Why does he have his shoes and a beanie on? WHY?!?!

This one is aimed at you, fellas. And the ladies too I guess, but I’d like think most women aren’t dropping their dacks on Tinder.

You know what I’m talking about. The ‘edge of the cliff’ nudies, where you’ve still got your shoes and socks on (why??) facing the ocean and fist pumping or flipping the bird like you’re Johnny Knoxville or something.

Hot tip: most men’s bums aren’t that attractive. Women don’t go around asking each other “are you a nipples or a bum woman?” [insert Jim Carrey dry retching gif]. It just takes away any sort of mystery surrounding what’s under your Best and Less satin boxer shorts your Mum bought you, and says you’d rather have a date at Tuggeranong Skate Park than Baby Su.

4. Pictures that don’t include you. Or humans at all, for that matter. 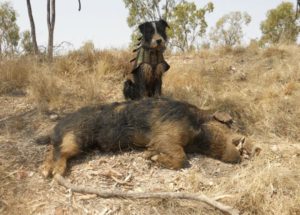 My cousin is actually going out with the bloke who posted this photo.

It’s a well-known fact that women are better at taking selfies than men.

I have hundreds (potentially thousands – don’t judge me) of selfies to choose from and I acknowledge that y’all probably don’t have those skills or that luxury. I’m begging you – please do not post pictures of the following: cars, motorbikes, animals, DEAD animals that you’ve hunted, scenic landscapes, or beers. I’m here to see YOU. If you’re just trying to fill the picture quota – don’t. Three clear pictures of you are better than nine of your latest fishing trip with Bazza and Muz.

5. Bios are more important than you think. 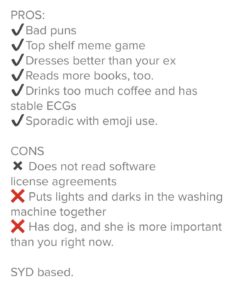 That’s a big fat YES from me.

Not posting anything in your bio is Tinder suicide in my book, and probably the number two reason to instantly flick you into the undateable abyss. Write something. ANYTHING. If you’re just looking to smash, say it. Sure, I’ll probably face palm and groan before moving on but it saves my time and yours.

Ah, the opening line. It’s as risky as eating at a new Indian restaurant the night before a job interview for the EL2 you’ve been acting in. Some of the messages I never replied to included: “You should come over”, “We should smash” and  “You’re a f*cking MILF”. Let’s not get crazy fellas. Aggressive over the top openers may show you have confidence but can also have her running for the hills faster than Julie Andrews. I appreciate a more personalised approach. Showing that you’ve taken the time to read my bio and look at ALL my photos. We both know that you’re potentially messaging 12 other matches simultaneously, so something that can’t just be copied and pasted will go a long way to getting a reply.

There are tradies in the APS? Intriguing.

Ughhh I can’t believe I even have to write this! You have two choices: either put your real occupation/education, or if you work for ASIO, leave it blank. Putting “Dolphin Trainer” or “School of hard knocks” or something stupid makes you look … well, stupid. I’d expect this is in the 18-22 year age bracket but when I’m talking 35-45 year olds, it’s anything but cute.

On the flip side, those bragging (usually police or fire fighters) can also be a major turn off. Having a job that makes a lot of money or shows you have a moral compass can be impressive, but you know what else is impressive? Humility.

Stay tuned for the next Tindergarten class, ‘Best and worst things we’ve heard on Tinder in Canberra’.