When I was a teen, I lived a very sheltered life. I was teased by friends for my lack of knowledge on M-rated topics. I knew nothing, so people went out of their way to “educate” me. You know, help me build my street smarts.

One particular winter’s day, while driving with a friend about four years my senior, we stopped at a red light, adjacent to a home with shoes strung over the powerlines out the front.

“You know what that means?” she pointed up to the pair of sopping wet grey Vans.

“It means a drug dealer lives at that house. They hang the shoes over the electricity lines to let people know you can buy drugs there.” 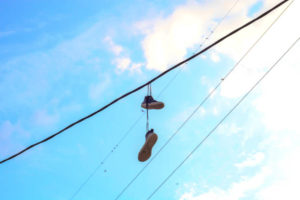 Lightning struck overhead and a clap of thunder made me jump out of my seat. I took another glance at the house.

What does a drug den look like?  I had no idea, but we were on Ross Road in Queanbeyan, and the house looked dodgy as hell.

In the years since, I’ve always been the first to notice such an instance. What’s the complex where you decide to buy a yellow car and then all of a sudden you see yellow cars everywhere? The Baader-Meinhof Phenomenon?

Not that I was into buying drugs, no no. But I’ve always been curious. How could this be happening right under our noses? Did the police know about this? The shoes always appeared in – how do I say this? – questionable areas, in front of questionable houses. Coincidence? 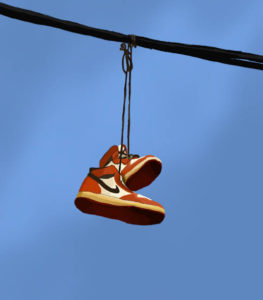 A pair of Air Jordans? What a waste!

When I drove past a set of shoes over electricity lines on a main road to Belconnen recently, the detective in me was re-awakened.

I started in the first logical place that all good research starts: Wikipedia.

“Several theories have been put forth to explain the phenomenon. One posits that it’s a form of bullying: a bully steals a pair of shoes and tosses them where they are unlikely to be retrieved.” Hmm probably, but I guess that’s what dealers want you to think.

“Another views shoe tossing as a practical joke played on drunks who wake up to find their shoes missing.” Funny, but no.

“More ominously, a 2003 newsletter from former Los Angeles mayor James Hahn cited the fears of many L.A. residents that ‘these shoes indicate sites at which drugs are sold or worse yet, gang turf’ and that city and utility employees had launched a program to remove the shoes.”

Oh. My. God. It couldn’t be. Had this gang-turf-drug-signal taken hold in Canberra too? Not my sweet, well-mannered, gay-marriage-legalising, cannabis-decriminalising Canberra.

I stopped what I was doing – there was no need to read any further. I had what I needed, and it was time to get in the car and capture cold, hard evidence of the phenomenon across Canberra. 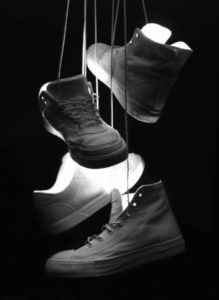 Thanks to US-based Ricochet Studio, you can buy the urban myth in beautiful lamp form.

Okay, so there weren’t as many as I remembered. Maybe, like in L.A, the ACT Government had started a specific operation to have the shoes removed? I couldn’t be sure.

It was time to take the investigation to a new level. I contacted ACT Policing.

A lovely man chuckled on the phone as I asked him my well-researched and solemn question – was there a link between shoes on powerlines and drug dealers’ houses? He told me to put my question into an email and someone would get back to me.

A fortnight passed and no response. Obviously, it was because I was blowing a gasket on their entire operation and they were potentially considering me for future detective work. It became all I could think about. I was obsessed.

While driving, I’d see a pair of dirty Air Max sneakers hanging overhead from the corner of my eye. Where am I? Charnwood?! I turned back to find it was merely a couple of chatty cockatoos. 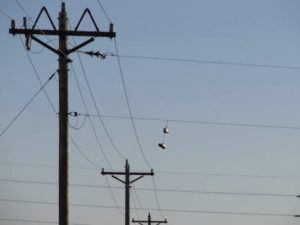 After a third anxious week, I finally got the email I’d been waiting for.

“Urban myth. It’s more likely an indicator of one sibling/friend throwing a pair of shoes over a powerline,” the email said.

“And it’s not really a Canberra thing as our power lines are all either at the back of our houses or underground.”

Relief washed through me. I knew the most liveable-city-in-Australia wouldn’t betray me like that. My home might have a dark side, but I sure as heck don’t want any part in it. (Although if I’m honest, I was also slightly disappointed Canberra probably won’t be the setting for the Australian version of my favourite crime series, Power).

I took a comforting walk around Lake Burley Griffin with a friend.

“I wonder how many dead bodies they’ve found in the lake,” she pondered between chugs of her drink bottle. My eye twitched.

About the Author: Rosalie Iannelli

As a born and bred Canberran and socialite at heart, Rosalie likes to make friends. This often means a 10-minute trip to the shops turns into a 90-minute chat-fest as she catches up on the goss with the six people she’s bound to run into. Rosalie loves food, Formula 1 (Ferrari, of course), writing, and running her PR and events biz, Good Day PR. You can catch her and her Nonna Rosa every second Friday from 7pm on QBN 96.7 FM’s Italian Program, spinning the hottest Italian tunes circa 1940 - 1999.