It’s the kind of photo you want to sneak into your handbag, take home and put on your own fridge just so you can enjoy it every day.

I mean, it’s a piece of Canberra history. The pool is littered with bright red number 1 lotto balloons. There’s a Canberra Times photographer IN THE POOL getting a shot for the front page. And the line for the slides is the longest you’ve ever seen it – with teens clad in string bikinis and Speedos and even a brave mum in a mission brown swimsuit. 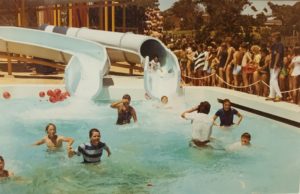 One of Canberra’s all-time greatest days.

It’s November 1983 and thousands of Canberrans have flocked to Belconnen for the opening of four brand new slides Macquarie Pool – the Family Slide, the Kamikaze and the Hurricane Twins. (Remember how much your bum hurt after you went flying at the bottom of the Twins?)

The framed photo sits on the desk of Aaron Watkins, whose mum and dad Ron and Beryl Watkins purchased Big Splash (then known as Macquarie Slides and Swimming Centre) after it fell into receivership in the late 1980s.

It’s one of many photos chronicling the history of the water park, which celebrated its 50th birthday in November.

“It feels like such a long time when you say that,” Aaron says.

“But with the maintenance in the winter and then opening every summer, the years go so fast.” 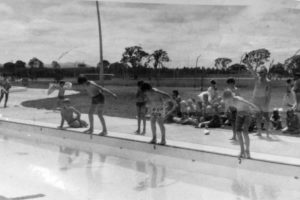 Kids diving into Macquarie Pool in 1970. Note the bushland of the new suburb in the background.

Macquarie Pool opened in the summer of 1969 with an Olympic-sized swimming pool and a baby pool attached. Its plush grass banks were the perfect place for mum and dad to relax while kids swam in the 1970s. The suburb of Macquarie was brand new, and the pool was pretty much surrounded by bushland.

The giant water slide tower – built in Japanese temple style – opened in 1983 and Whitewater Mountain, a miniature area for children with caves, slides and rope bridges, came soon after. In the 1980s, teens began referring to the water park as The Jammo Pool or Jammo Slides. 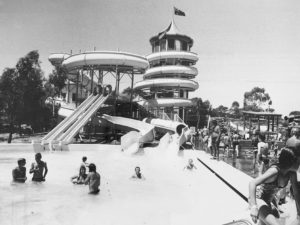 The Hurricane Twin slides were removed two years ago due to age. Photo from 1984.

The Watkins family took over in 1990, having previously owned the Deakin Pool (now Oasis Leisure Centre). Suddenly, the Watkins brothers, Aaron and Troy – both Daramalan College students – became the most popular kids at school.

“We had all of our friends here on weekends and then when they were all old enough to work, of course they all wanted jobs as lifeguards,” Aaron laughs.

“But back to owning pools, Dad [Ron] was a world class swimmer and always loved just owning and managing pools.

“He was destined for the 1956 Olympics but had an unfortunate incident with a window while playing soccer, he almost lost an arm.” 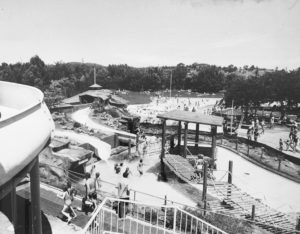 In 1991, the Watkins family renamed the water park Big Splash and in 2011 the water park got its first new slides in more than two decades. A set of $1.5m slides being dismantled at Wet-n-Wild theme park on the Gold Coast – the Speedcoaster and the Twister – were trucked to their new home in Macquarie, ACT.

Aaron, a trained builder, led the team that built and installed both slides. 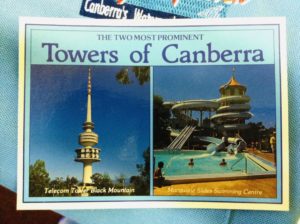 Brilliant marketing by Macquarie Slides and Swimming Centre in the mid-80s.

It’s “a huge cost” to maintain the park, Aaron says, and for the five months before Big Splash opens in November, staff are preparing and upgrading facilities ahead of huge crowds.

“We know that some of Canberra’s greatest memories live here, and we’re keen to see people make more.”