The man. The traffic controller. The legend. We get up close and personal with Josh Jones

The man. The traffic controller. The legend. We get up close and personal with Josh Jones

I’m out the front of Kippax Shopping Centre waiting for Josh Jones to meet me for a coffee. I have no idea who Josh even is, but so many of you have written to C! News asking for a story on ‘the awesome lollipop guy’ that I’ve used my research skills (i.e. Facebook) to track him down.

I spot him on the horizon; long-sleeved high-vis top, dirty work pants and steel-capped boots, and man, a mullet so good it makes my eyes water.

I instantly break into a smile. I’ve never met Josh before but I’m giggling to myself. His energy just screams ‘absolute legend’. 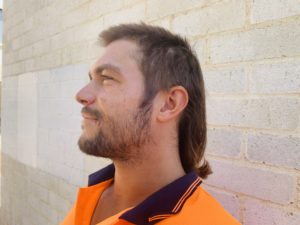 ‘Nan cuts my mullet for me, she has one too.’

We head into Kippax Fair and he’s a local celebrity. ‘G’day Steve!‘ he yells to the man behind the counter at BWS, whom he knows well. When we arrive at the Coffee Club, he spots a friend. “Aw that’s Taylor, I better just head over and say g’day.” Taylor smiles as he scoots over.

Josh has that effect on people. You’ve probably smiled – heck even laughed – at Josh yourself as you’ve driven past him after waiting patiently at a set of roadworks. The 23-year-old is a traffic controller with Care Traffic, a Fyshwick-based company managing the traffic around roadworks throughout Canberra and Queanbeyan.

But Josh doesn’t just turn a lollipop from Stop to Slow. He smiles, waves, gives a massive thumbs-up, a double-tap on the heart with a peace sign, or does a bit of twerking and cracks himself up. Truckies love him, bus drivers love him. It’s safe to say the whole capital loves him. 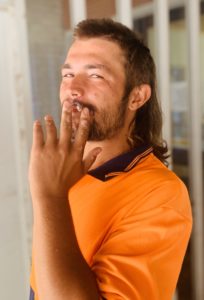 ‘Every day’s different,’ Josh says of traffic controlling. ‘I love it.’

“I just feel like I make people’s days,” Josh says between sips of a salted caramel frappe.

“Making people smile is something that just inspires me to be the best I can be.”

The born and bred Canberran admits that 2020 Josh “has come a pretty long way”.

He describes his upbringing in Belconnen as “pretty hard”, living with an abusive stepfather for most of his childhood and struggling at school. He attended St Joseph’s Primary School in O’Connor and later Radford College – “I didn’t really fit in at Radford, I hated it” – and had random jobs after eventually graduating from Hawker College. He was on the dole when a friend suggested traffic control in 2018. 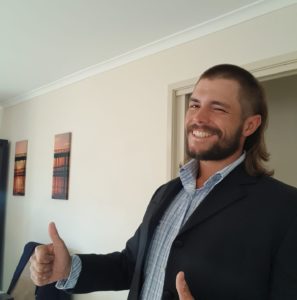 Josh in the suit given to him by Sam Catanzariti Menswear owners just ‘for being myself, I think.’

“I absolutely love it,” he says.

“The more I did it, the more I learnt about roadworks, how all the traffic laws work, placing signage, distances.

“There’s heaps to it and it’s something I’ve really grown to learn and appreciate.

The response Josh gets from drivers “is phenomenal”. Young women stop and give him their numbers. One time, the owner of Sam Catanzariti Menswear in Civic presented him with a flash new suit because he was so impressed by Josh’s energy.

“He drove past a few times in his Skoda then one day he yelled out, ‘Will you be here tomorrow?’

“I said yeah mate and gave him a thumbs up, and he turned up the next day. He gave me a suit. It fit like a glove. I love it.”

He’s probably landed his dream job at the ripe old age of 23, Josh says. He can’t see himself doing anything else as a vocation – other than potentially being a rockstar. Josh plays guitar and sings – Foo Fighters, Dire Straits, Megadeth, you name it – and he and best friend Blake play as a duo every other week at Moby Dick’s Tavern in Holt. Blake plays the drums and yes, he has a mullet too.

The music helps Josh manage his mental health – “I’m passionate about it and it’s a good distraction”. He gets pretty philosophical as he rolls a durry in the Coffee Club after finishing his frappe.

“I stay happy by making others happy,” Josh says.

“Cause I used to be in a really bad mindset for a while.

“I just feel like it’s so much better being happy – it’s so easy to sit around and mope and feel sorry for yourself, when you can just sort of say to yourself, the past is the past.

“I just look onwards and upwards.

“At the end of the day, you’re the only person in the world who can decide how you feel about anything, and I just decide to be happy.”

I finish with a question on behalf of all the single women of Canberra: does the capital’s favourite traffic controller have a girlfriend?

“A boy never kisses and tells,” he laughs.