The 110-year-old weatherboard cottage at number 274, once the home of J.B. Young of local department store fame, is being transformed into what its owners hope will be a busy and creative heart in the city’s centre.

The cottage’s beautifully-restored pressed tin walls, exposed floorboards and fireplaces – including the original Bega wood stove in what was the old kitchen – speak to life of more than a century ago. But on top of this detail, modern creative props are being added, like illustrations and photographs hung on walls, and rooms filled with upcycled chairs for watching live music, creating a beautiful destination “where people can truly connect”. 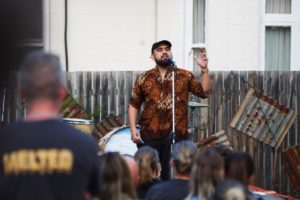 Queanbeyan poet and author Omar Musa headlined an event at the Hive in January that raised $8000 for WIRES. Photo: David Burke

Helen and Simon Ferguson had a vision for The Queanbeyan Hive when they purchased the cottage in 2014. When the property’s tenants moved out in early 2018, the couple started extensive work on the home, and have since hosted 21 events – from art exhibitions and meditation sessions to markets and a bushfire fundraiser by local poet and author Omar Musa.

And that’s just the beginning.

“A dream week for the Hive looks like this – a live music event, like a parlour gig in winter or out the back in summer, some theatre, an art show, workshops being led by local artists and one or two games of Dungeons and Dragons,” Simon says.

“There’s a food van for lunch and a coffee van.

“It’s busy and humming and people are coming and going in their own time.” 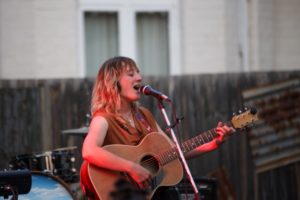 In their historic creative haven on Crawford Street, Helen, a graphic designer, and Simon, a writer, see a little bit of Sydney’s Newtown and even Kings Cross.

“We lived in Newtown for a while and it’s definitely the centre of history meets quirky meets art meets creative,” Helen says.

“We had to go to Kellett Street [in Kings Cross] a few times and I loved that area – it’s basically a strip of bars and nightclubs in terrace houses.

“It was a tiny little quirky area of Sydney, so I thought why can’t we have that? Why can’t our dream venue be in an actual house that’s like a home?” 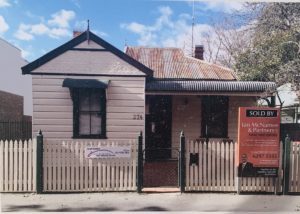 The house at 274 Crawford Street in 2014. The Fergusons have since painted it yellow, winning Queanbeyan-Palerang Regional Council’s Best Heritage Restoration in 2019.

It’s going to be a big year for the Hive.

With the cottage now looking stunning – the Fergusons have put up their own money, as well as winning a series of government grants to restore the home – it’s time to fill it with more events and lots more people.

This Sunday 1 March, experimental pop artist Endrey will play live in Endrey and Friends at 6pm, but beforehand, in true Hive style, he’ll host The Big Why, an artistic development workshop for local performers.

Before that, if you want to volunteer or become a member of the Hive, inductions are being held from 11am-1.45pm on Sunday. 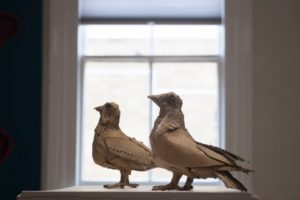 ‘Trash Birds of North Sydney’, by Canberra artist Tom Buckland, was one of more than 70 artworks featured in the Hive’s first ever art show. Photo: David Burke

In April, the Hive will host an exhibition by Queanbeyan character Connee Colleen, run a night of interactive theatre called Nightfloors and Lucy Sugerman of The Voice fame will perform.

“We feel like everyone’s very disconnected from each other, and that’s a thing this town suffers as much as anywhere else,” Simon says.

“The Hive is like the building equivalent or the cultural equivalent of slow food – slow down, reconnect, reconnect with each other face to face, ear to music, eye to art, just be there, be with other people.”

From mid-March, The Queanbeyan Hive is open Wednesday to Sunday, 10am-4pm, and Fridays 10am-9pm.

For tickets to the Endrey events on Sunday 1 March 2020, head to Eventbrite.

For more information on The Queanbeyan Hive, and to book workshop spaces or meeting rooms, head to https://www.qbnhive.buzz/