Why the hell are we still forking out $35 for school photos?

Why the hell are we still forking out $35 for school photos?

Most mornings when I whip out my laptop at 8.20am to pay for an excursion that’s happening THAT DAY – yes, I’m that mum but mostly my kids are those kids – I’m frustrated but never truly angry.

But this week, I found myself totally resenting and seriously questioning a $35 payment I was making online.

It wasn’t for a sports carnival, a theatre excursion or part of a payment for Camp Whoop-Whoop – it was for school photos. You know, the hard copy pics the kids bring home in a pretty plastic sleeve and you end up photographing to share on Facebook? Those ones. 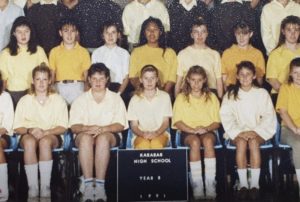 This group shot of Karabar High School students in the 90s actually did come in handy for a recent C! News story.

So here I was paying the bare minimum possible to The School Photographer – a $35 pack where my child received a Year photo and an individual shot – not because I wanted a photo of her with straightened hair and her flash new braces but so she wasn’t embarrassed in front of her friends.

Because honestly, I carry around hundreds of photos of my teenage daughter in my handbag every day. I share them with friends and families in .001 seconds. On this same device, you won’t believe it, I have photos of her from Kindergarten and Years 1, 2, 3, 4, 5, 6, 7, 8 AND 9.

So why am I paying a small fortune every year for school photos?

Okay, okay, what I don’t have on my phone are photos of her classmates. You know, the ones she never talks to and won’t care less about two weeks after graduating (the ones she does care about she’ll befriend on whatever social network exists in 2022).

We know who the favourites are: my brother and cousin take pride of place in Nan’s wallet.

So if I’m balking at paying $30 for the basic pack, who in Lord’s name is buying the $48 pack? The one that includes bottle openers, a stubby holder, a keychain and a bookmark? Do people really send all that stuff out to their wider families each year, with a ‘Hey! Josh’s new school pics are here, time to throw out last year’s keychain!’ (as if you hadn’t already).

I’m all for souvenir pics atop a nightmarish roller coaster on the Gold Coast, but as much as I adore my nieces, I don’t need to carry their little faces around with the key to my new Jeep. 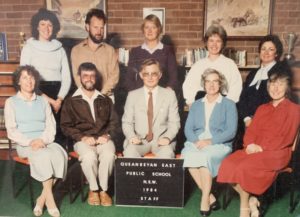 Do teachers still get their own separate photo?

I completely understand that there was once a time when photos were more scarce than non-smokers. And that in those days, the annual school photo was an important record of how much your child had grown (and how good-looking the teacher was). I also think that back in those days people moved around a lot more, so the school photo was an important tool for tracking the family’s journey across the NSW countryside.

I adore my mum’s school pics from the 1960s – she’s always the one with a unbrushed mop of white-blonde hair, chubby face, doing a crazy pose. Having your photo taken was a big deal back then, and so rare she had no idea how to act in front of a camera. 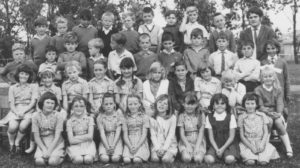 A Year 3 class from Queanbeyan West Public School, 1969. My mum is second row from the front, second from right.

In 2020, my kids are more photographed than J.Lo on a stripper pole.

If the past is the best predictor of the future, I’m more likely to share a pic of my daughter from Kindergarten because Facebook told me to – complete with the obligatory ‘Where did my baby go???’ – than to pull out an actual photo from a dusty Kmart storage tub in the garage and look at it.

I’m making a stand from now on and I’m not paying for school photos. My kids can get dressed up on photo day and send me a Snapchat selfie. They will anyway.