They’re dotted around the capital; underneath public service buildings, in laneways, on corners, and sometimes even in shipping containers. And they provide the liquid gold that not only makes our morning staff meetings bearable, but likely prevents us from murdering our colleagues and/or family members most days.

At C! News, we thought it was about time we re-paid our baristas some serious love.

So we’ve launched ‘Canberra’s Most Eligible Baristas’, a series designed to showcase the coffee-makers of the capital looking for love. (And, selfishly, we have some single people on staff looking for a partner who can make a bloody decent flat white, thank you). 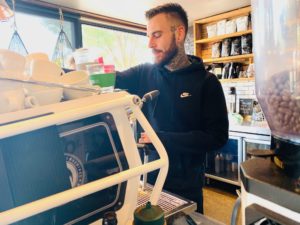 Eli behind the machine at Coffee Lab. The flat white he made me was 7/10.

We kick off with Eli Taylor, the most barista-looking barista in Canberra – with a perfectly manicured beard, tattoos for days, piercing blue eyes and who dresses head-to-toe in distressed denim.

Eli’s the manager of Coffee Lab, on Narellan Place in Civic, overseeing a staff of 17 and the production of around 3000 coffees a week (mostly for ATO and DVA staff in nearby buildings).

Originally from Cooma, Eli’s not really in touch with his country roots – “I’d nuke the place if I could,” he says of his hometown – but Cooma is where he honed his barista skills. He grew up in a hospitality family in the purest sense: his dad is a fine dining chef while his mum has a history of owning and managing cafes and restaurants.

Tindergarten: The best (but mostly worst) things I’ve heard on Tinder in Canberra

Eli mastered the coffee machine working at The Pastry Box, a cafe he owned with his mum on Cooma’s Sharp Street.

When it comes to what he’s looking for in a woman, Eli immediately goes to his senses.

“My main thing is someone that smells nice,” he says.

Despite his own extensive tattooing – including an upside-down cross on his neck and a Japanese symbol for Satan on the side of his head – he’s not into women with tattoos. But he is into downloading and watching B-grade occult horror flicks, with titles like Cannibal Holocaust. 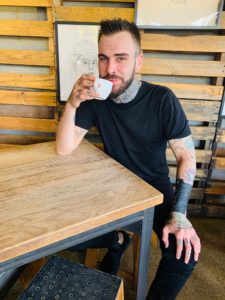 Eli’s in the process of having his arm ‘blacked out’ – leaving only the tattoos he likes showing.

“I’m looking for someone with a very dark sense of humour, who can handle dark jokes, I’m a big horror movie buff so someone who doesn’t get freaked out by gore,” he says.

Since moving to Canberra five years ago, Eli’s casually dated a number of women, but wants something permanent. At 30, he’s looking to commit and would love kids one day.

He uses all the standard apps for dating – Tinder, Bumble, Instagram DMs – and occasionally hits up the app for the kinky community, FetLife, to meet potential partners in Canberra.

“I just think it’s harder than ever to meet and connect with someone,” Eli says.

“When you’re spoilt for choice, it makes it that much harder.” 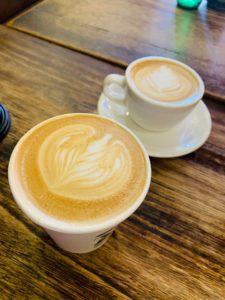 Annual trips to Japan are a staple for Eli – “Tokyo, Osaka, Kyoto, they all feel like home to me” – and his dream date involves seriously dressing up for dinner at a Michelin three-star restaurant. (Good luck, the closest one is in Singapore).

And what’s a woman signing up for if she dates a barista?

“Very early mornings – I don’t know how to sleep in,” he laughs.

If you’re keen to get to know Eli, email editor@qnewsmedia.com.au or, you know, call into the Coffee Lab!