When little Caitlin White and Nathan Wilson first kissed in the cubby house at pre-school in Hughes, they could never have guessed that more than 20 years later they’d be marrying each other for real – in front of a computer screen audience and using a tool called Zoom, no less.

But that’s exactly what happened, and even the stringent rules of a Stage 3 lockdown, nor a stormy afternoon in COVID-19 Melbourne could dampen their spirits. 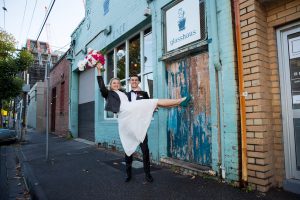 Richmond was the backdrop for the newlyweds’ cute and very Melbourne wedding pics. Photo: Berrick Wilson

Having recently had plans for their dream wedding for 100 guests in the Yarra Valley dashed by the Australian Government’s rules prohibiting large gatherings, Caitlin – a primary school teacher at Melbourne’s Haileybury school – and Nathan – a psychologist – decided not to let the new rules derail their decision to marry.

As soon as the five-person limit on marriages was announced by prime minister Scott Morrison, the couple immediately asked celebrant Damon Hughes if he could officiate a ‘marry now, party later’ style elopement. Damon gave a resounding yes, and so the couple began working on their Plan B. 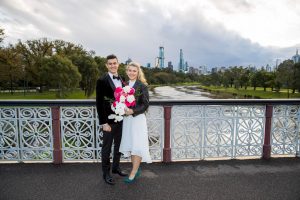 The newlyweds met at school in Hughes, ACT, and now live in Melbourne. Photo: Berrick Wilson

The four performed a brief rehearsal (mainly to work out where the laptop should be set up), then one by one their parents, grandparents and siblings came online to watch a very special private ceremony. 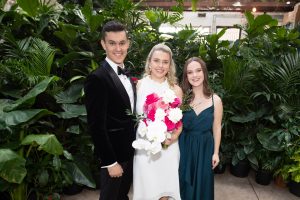 Nathan and Caitie with one of their witnesses, Alexandra. Photo: Berrick Wilson

“Today is all about the couple,” celebrant Damon Hughes said, acknowledging the unusual set-up and the unprecedented times.

“When planning their wedding, Caitlin and Nathan told me they wanted their wedding to be all about family and friends. Having said that, let us not forget that this ceremony is all about them – but the next event in October will be all about you! So let’s get them married!” 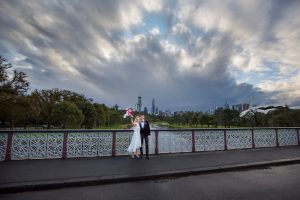 Caitlin and Nathan exchanged vows and rings as their families watched via Zoom and were even serenaded for their first dance with an impromptu rendition of Shania Twain’s Still the One, sung – over Zoom – by Nathan’s uncle Greg in Byron Bay.

Later, the former Canberrans had a series of magnificent, typically-Melbourne photos taken in Richmond and overlooking the Yarra. But this was no typical day: this was love conquering all – even in the times of Corona.

About the Author: C! News Media

Proudly brought to you by the writers at C! News.