Welcome back to Tindergarten! While our Highball Express cocktails, GoBoat rides on the lake and booty calls may have come to an abrupt hiatus, COVID-19 cannot stop us from using this time to sharpen our Tinder skills.

Today we will be discussing a more serious topic in Tinderland: “CATFISHING”.

Sounds like one of Joe Exotic’s pets, but actually refers to the act of someone purposefully lying about their identity to trap you into an online relationship. MTV have made a whole reality series people who have been catfished online and some of the stories are wild y’all. 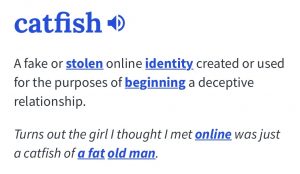 My Canberra catfishing story begins way back in my early Tinder life (think skrillex hair and overly drawn on lips). At 36, I was out of a 15-year relationship/marriage that began when Nokia 3210s had Snake and Avril Lavigne and Shakira rocked our worlds. Naïve would be an understatement.

I had the new skill of online dating about as under control as ScoMo in a global virus pandemic. Enter tall, dark, handsome, athletic lad named “Nick”.

The majority of his pics were casual selfies, flexing and the standard type thirst traps. He had a Raiders hoodie on in one of the pics but I didn’t actually think much of it, as an ex-WAG I already noticed Raiders fans seem to be in abundance in Canberra’s Tinder Teledex, and I had matched with Brumbies/Harlem Globe Trotters/Cavalry players before … I guess you could say I have a “type”. 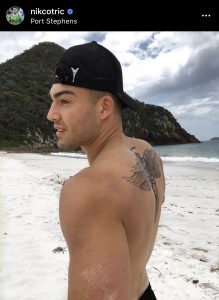 My finger automatically swipes right and BAM he instantly starts messaging me. Showering me with compliments and firing questions at me, I’m a little skeptical so I keep him in the rotation but don’t let him run the whole press conference. 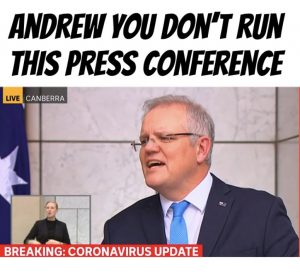 His next move is to slip in the sneaky Snapchat request, which is pretty standard so I allow it. I mean he looks like a Serbian Adonis, he says he’s in his early 30s and plays for a professional Canberra sports team, seems safe enough right? (Yeah, about as safe as eating from Joe Exotic’s pizza place.)

Tindergarten: The best (but mostly worst) things I’ve heard on Tinder in Canberra

He asks me about my kids. Okay, that seems nice, a bit soon, but nice. Things take a turn when he starts to ask me about my past, my marriage, my ex, would I consider him as a stepdad? WHOA there Mike Brady, I may be fairly new to this but this ain’t my first rodeo. I mean I’ve binge-watched Catfish the TV show (team Neve!) and this all just seems a little fishy.

So I decide to do a little investigating. 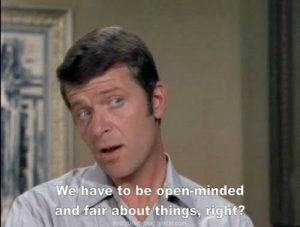 First things first. I try to get him to send me a Snapchat picture. I send a few cute selfies and the response is quieter than the Mooseheads dance floor in a COVID-19 shutdown. I decide to dig deeper and check out his Snapchat profile. I discover that it’s a new profile because his Snapchat score (determined by one’s Snapchat use) is basically zero. Zip. Nada.

I call him out on not being the real Nick Cotric but his Jersey Shore game is strong … deny deny deny. He refuses to send me a picture to prove his identity and this is where our brief relationship ends. Like Pam and Tommy, or Jen and Brad, our relationship was destined for failure. Okay, it wasn’t a relationship but it could have been and could have been a HUGE *Donald Trump voice* waste of my time! If I hadn’t had watched all those Scooby Doo and Inspector Gadget episodes, that is.

Top tips to identify a catfish:

Remember, be cautious when dating online. You never know who is really on the other end of the phone.

Disclaimer: Nick Cotric has no affiliation whatsoever with catfish who are thirst-trapping cougars with his shirtless Instagram pics.