The lounge room painting bringing joy to the people of Fisher

The lounge room painting bringing joy to the people of Fisher

It was during my morning Instagram scroll that I stumbled across a post by The Happy Broadcast. The Happy Broadcast launched 12 months as a channel for optimism and positivity about all the things good with the world. During the fires, I took great refuge in seeing the good, while keeping windows locked tight to avoid the toxic air outside.

After a summer of stress and isolation due to fire, here we are again holed up in our homes, trying to endure a global pandemic. There’s a lot of uncertainty, but one thing we all know is this is the new norm – for at least the next little while.

A few weeks – days? – into #stayhome, the challenge of isolation for my kids started to become really bloody obvious. I don’t know if my six-year-old consciously notices it, but I have noticed she’s “bored” more, and more sassy than usual (so very freakin’ sassy).

So when The Happy Broadcast last week featured people hanging printed rainbows with the words “everything will be ok” in their windows, to help reassure passersby and bring a little joy into the world, I thought, bugger it, today we are painting the window. 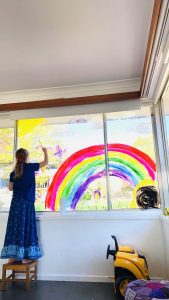 Delila and I spent an hour or so painting a giant rainbow mural on our living room window. We didn’t have a brush big enough, so opted straight for finger painting, using the water-based washable poster paint we had in our craft cache. By the end, the living room resembled a local kindergarten, but slowly people started to look as they walked past, smile, and then wave to us.

My daughter’s face lit up every time, and she became conscious our painting was “helping make people smile mum!”

I posted the time-lapse of our project onto my personal Facebook page and people loved it. A friend of mine said I should share it to “The Rainbow Trail” Facebook group, which today has 134k members. Prior to Sunday, I had no idea this was really even a thing. But it turns out its massive in the UK – so massive in fact that the Queen mentioned rainbows hung in windows during her Easter broadcast to the nation.

Yesterday, one of the neighbours called me to thank us for painting it, saying that she and her husband love looking out of their window and seeing it across the street. Already we plan to expand and paint more. I love that it is helping connect us to the community, because we all need a bit of brightness in the world in times like this.

And while adults and parents of 2020 will remember this time as a stressful, economically-challenging, unprecedented time, hopefully Delila looks back and remembers a time spent playing in the garden with her family, and painting rainbows on her windows.

About the Author: Bianca Way

Bianca is a ride or die Canberra local with a passion for storytelling, writing, marketing and real estate. She lets her unique, honest, and practical view of things seep into her writing, with a bit of good humour sprinkled on top. She hopes to inspire people to find out more about the community they live in and connect with the heart of Canberra.