Deep in the heart of Belconnen, underneath ABS House, there’s a quiet woman who works behind a coffee machine, pumping out killer flat whites.

She’s small of stature, but don’t underestimate her. 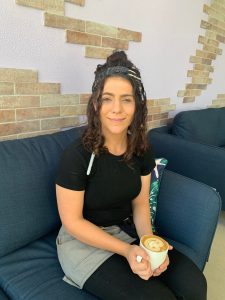 Darcy’s dream jobs involve coffee and writing: she’d love to work for Ona, and review travel destinations on the side.

She’ll kick your arse at Mario Kart, race you to the bottom of the ocean in a wetsuit and to the top of Mount Clear in her hiking boots in Namadgi National Park.

Darcy Wilkinson, 25, is next on the C! News list of Canberra’s most eligible baristas (the series kicked off in March with Eli Taylor from Coffee Lab, you know, before a certain global pandemic hit).

Darcy’s not into hitting nightclubs but does love the occasional gig at Smiths Alternative. She’d rather hit a national park than the gym and her ‘Because You Watched’ list on Netflix features Lucifer, Stranger Things and You. 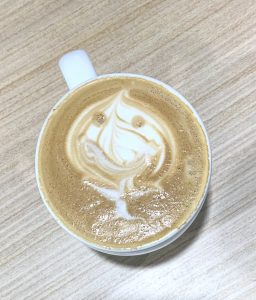 There’s an alien in my (Darcy-made) coffee!

She’s looking for a male partner who’s intelligent – “nerds are definitely my thing” – who’s keen to have the occasional beverage at Reload and wants to see as much of the world as she does.

“I want trust and someone funny. Personality is a big thing.”

Her dream first date features an early start and a huge dinosaur.

“I love the huge T-Rex that we get in Canberra, so just to stand in front of him with a hot coffee would be amazing. And maybe pancakes after.” 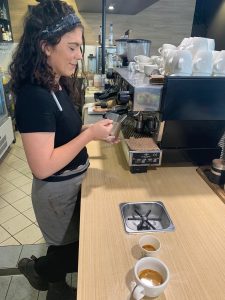 Darcy doing what she loves best.

It’s a horrible reality but if you’re keen to date Darcy you need to love beautiful beaches and connecting with nature (we know, awful). Darcy grew up on the mid-northern NSW coast in the tiny town of South West Rocks and dreams of one day returning.

“I love Canberra but I’m keen to head home [to South West Rocks] one day – it was voted number one tourist destination in Australia, so to say it’s beautiful is an understatement.”

Darcy’s worked as a barista at Calypso Cafe at ABS House for 12 months and occasionally sees someone in line she’d love to get to know.

“I know everyone’s names and their coffee orders but not their relationship status,” she laughs.

“Honestly though, I’m looking for someone with a sense of humour, who loves good coffee and be warned – I’m an early riser.”

If you’re keen to get to know Darcy email editor@qnewsmedia.com.au