Someone just paid $600,000 for this three-bedroom house on Donald Road. Here’s why.

Someone just paid $600,000 for this three-bedroom house on Donald Road. Here’s why.

It may be lovingly referred to as “The Bronx” by people who grew up across the border but it seems people are now paying big bucks to live in the Karabar area of Queanbeyan.

This three-bedroom, former housing commission home on Donald Road is currently under offer at around $600,000 – the kind of price tag that would have knocked the socks off its original owners in 1971. South Queanbeyan was dense with government housing in the 1970s, 80s and 90s, with street names like Cameron Road, Southbar Road and Karri Crescent packed with blue collar families and those in subsidised accommodation. 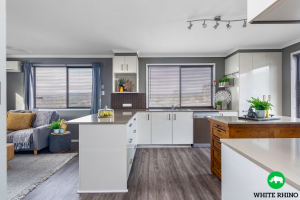 But a severe supply-and-demand issue for housing in Queanbeyan means people are now buying the former government-owned houses and giving them extreme makeovers.

White Rhino Property sales agent Belinda Le Ruez is in the process of selling 120 Donald Road – located between Karabar High School and Southbar Road – and says the big price tag was driven by the large backyard, renovated bathrooms and the home’s “look and feel”.

It’s fair to say the house at number 120 Donald Road has been stripped of almost every element of its original housing commission design. Low quality carpets have been ripped out to make way for floorboards, mission browns have been replaced with a cool grey and khaki colour palette and once tiny bedrooms have been expanded by wall removals and the addition of an extension. 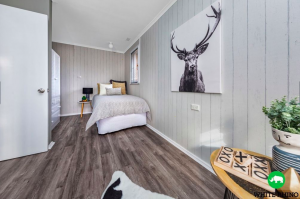 Wall removals have made the former tiny bedrooms much bigger.

The huge shortage is pushing prices up, with three-bedroom homes in Queanbeyan hitting the high $500,000s and four-bedroom homes with ensuite securing $720,000 plus. It’s the kind of money that will buy you this piece of paradise on the East Coast of Tasmania or a tranquil two-storey villa on the banks of the Noosa River. 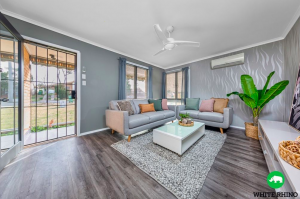 The windows are the only housing commission elements that remain.

Jason Maxwell says buying an ex-housing commission home like this one currently listed in Boronia Crescent, Queanbeyan, which he expects will sell in the high $300,000s, and doing it up is actually a smart investment.

“Housing commission homes are perfect as they’re still affordable, usually have a flexible floor plan and plenty of land,” he says.

“Then once renovated, they’re still great value for first home buyers and even investors and they rent so well.” 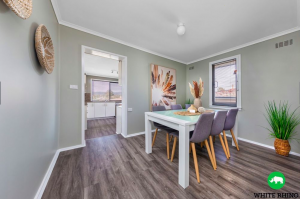 Is there a negative stigma around areas that have been home to government housing for decades?

“Nowhere near what it used to be,” Jason says.

“We’re getting new generations through who like the potential, the big blocks, and the affordability.”

To those people keen on ‘flipping’ former government housing to turn a profit, Jason warns not to overcapitalise.

“Keep the renovation to cosmetic needs – kitchen, bathroom, paint and carpet,” he says.

“That way they return on investment is strong and there’s a wide market to purchase the completed project.”