It’s been a long six months for Australians – and Victorians in particular – since the country went into COVID-19 lockdown in late March.

But (almost) every single week for 25 weeks one Queanbeyan woman has done her bit to bring absolute joy to her work colleagues, family, friends and the people of Canberra during the stressful times of the pandemic. 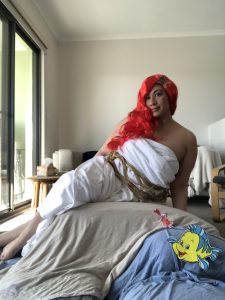 Kathrina as Ariel. “My work colleagues were constantly surprised, but sometimes they wouldn’t know who I was. I guess not everyone is as big a Disney fanatic as me.”

Kathrina Weinhonig, a public servant who grew up on a diet of Aladdin, Mulan and Pocahontas, has dressed as a Disney character every Friday since the seriousness of coronavirus was announced in March. It started out as a prank for weekly Zoom calls with her public service colleagues, but after our story in May and a subsequent interview on ABC Radio, DMs from people encouraging her to continue started flowing in. 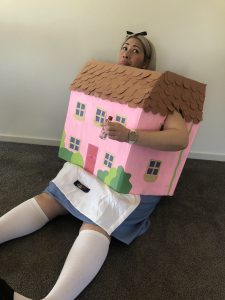 Alice in Wonderland was Kathrina’s favourite. “I honestly believe that imagination is the only weapon against reality.”

“COVID stuck around longer than I expected, so I’ve continued working from home,” Kathrina says. 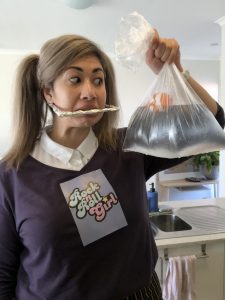 While Kathrina’s take on Maui from Moana had her work colleagues and friends in an uproar of appreciation early on, Ursula from The Little Mermaid garnered an even bigger response.

“Ursula took out Round 2 [of COVID #workfromhome], but after an hour of scrubbing off purple paint I contemplated giving up,” Kathrina laughs.

“I had paint in places paint had never been before.

“How could I beat it? She has always been my favourite villain – she’s sassy and proves big girls can be sexy.” 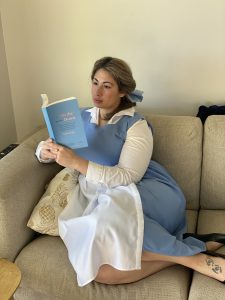 Kathrina’s Belle costume was sent down from Sydney by her grandma.

Kathrina went out in a puff of smoke – literally – when she dressed as Genie from Aladdin for her grand finale last Friday. The 34-year-old is starting a new role and transitioning back into the office, where she’s not sure her new team will appreciate A Finding Nemo or Toy Story character turning up on Casual Fridays.

“I’m devastated to be giving it up but it’s been exhausting,” she says.

“I put a lot of pressure on myself to exceed each week from the week before – 23 outfits in 25 weeks has been a lot of work.” 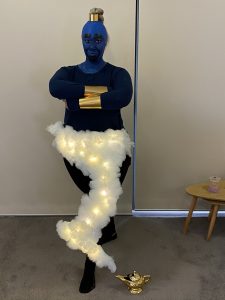 But she’s keen to continue making people smile during the remainder of what has been a horror 2020.

“I’m happy to attend kids parties in character, free of charge of course,” she laughs.

“Book Week is coming up – happy to lend a crafty hand or costumes. 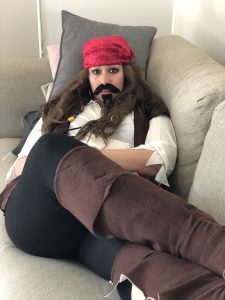 “I’m humbled at how much positive reaction this has received. I never thought it would be anything or mean anything to people.

“Maybe I’ll do a monthly Sunday Funday – as long as others get involved with me though.”