“There’s no victory in one person being left behind.”

If I hadn’t just spent the last hour getting to know first-time Ginninderra Labor candidate Greg Lloyd a bit better, I would have thought he’d ignored my “no politician answers” rule.

But he’s just answered my question about what it’s like to run against his friend of 16 years, Tara Cheyne MLA, and I understand what he means.

It’s days until the polls close and Greg and Tara have been campaigning for months. Saturday mornings at the local shops, getting chewed out by local political sceptics and conspiracy theorists, braving less than favourable weather, and exceeding their daily step targets while letterboxing. 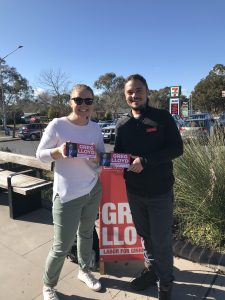 Almost dropped my coffee when I spotted fellow graphic design lover and candidate for Ginninderra Greg Lloyd at Spence shops.

I first meet Greg Lloyd when I post a spur-of-the-moment Instagram design review of the electoral pamphlet he puts in my mailbox. I give Greg’s pamphlet an 8/10 for on-brand cohesion, typesetting and image choice. He DM’s me on Instagram to let me know how chuffed he is considering he’s a novice InDesign user. I then spot him standing next to his sandwich board at the Spence shops and almost spill my coffee in the rush to meet him. And so begins a beautiful friendship.

Over the course of a few more DMs, Greg reveals that he and Tara Cheyne (MLA and Government Whip in the most recent Labor-led ACT Government) are long-time friends. In fact, this election, they are both vying for a seat in the same region. I immediately smell a C! News story. (I also want to understand the competitive devastation that Tara probably felt when I awarded her a 7.5/10 for her own pamphlet.)

The long-time friends agree to meet with me and I begin with the classic conversation starter, “So how did you meet?”

They laugh and Greg explains how mutual friend Toby introduced the central Queensland UQ alumns while they were living in ressies in 2004. With no car between them, Greg and Tara soon bonded over coordinating Maccas runs in a group chat. They became fast friends with common interests. 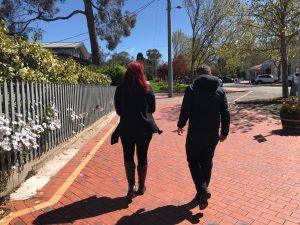 Tara Cheyne and Greg Lloyd on the campaign trail.

“But we were known for fighting a lot,” Tara laughs. (I can see from the looks on both of their faces though that they love the friction of having a friend who truly challenges them.)

“He actually really prides himself on being helpful,” Tara says.

“And fortunately I need a lot of help. So it suits both of us incredibly well.

“In 2006 I had a boyfriend who was deported. We’d been inseparable and were always hanging out with each other, and I fought really hard for him to come back.

“But while he was gone, I thought, ‘Look at all these other friends I have, maybe I don’t need to move to Norway’.

“In that time, Greg and Toby in their own way were very supportive.

“At one stage of my life I was going to go and live in Norway, and that would be my life and I’d be a journo there. And then in this period at the end of 2006 it all changed for me, and I was like ‘maybe I want to go to Canberra’ and ‘maybe I want to do Australian politics’ and ‘maybe that’s where my interest is’.

“And it was people like Greg and Toby who made me realise I did have a world outside that relationship. That’s where everything really changed for me.” 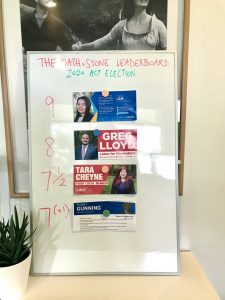 It was soon after this realisation Tara was accepted into the Attorney-General’s Department grad program and moved to Canberra.

It was 2008 and, like Tara, Greg had finished his law degree. Like a lot people who study law, he decided he didn’t want to be a lawyer.

He took a role at the UQ Library in IT support, but the annual $40,000 pay check wasn’t going to keep him in the library, so, like Tara, Greg started looking for a grad job.

Meanwhile Tara “was living in Red Hill, which I hated. [In my early years] I hated Canberra and hated living here.”

But little did she know that her impending move to Belconnen Town Centre would set her on a different course, and help her find her place in the capital.

“Everything changed for me,” she recalls.

“I’d moved around heaps as a kid. Moving to Belconnen finally felt like home and like I really belonged.”

Greg soon joined Tara in Canberra with his own grad job, and in the same share house no less. 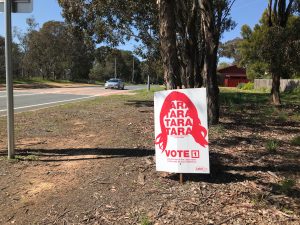 He joined the ALP after the Liberals win in 2013. Tara had joined the party in 2007, and Greg admits that the fact his best friend had joined in in 2007 played a part in his decision to join.

“I like to joke that I was inspired to join the Labor Party by Tony Abbott – if you don’t get involved, then you really have no right to complain.”

You’d be forgiven for thinking the friends had become co-dependent since their days of the Maccas run group chat, and there was an influence of Tara ‘paving the way’ to Canberra, moving to Belconnen, and joining the Labor Party. But at this point in the conversation, I realise that the two are absolute complementary magnets, destined to be linked.

Tara was pre-selected just after her dad passed away in 2015, and she worked hard to be elected as a member of the ACT Legislative Assembly.

“Throughout that time Greg was incredibly helpful,” Tara says. “I’d be like, ‘I want to do this design, how do I make it happen? What font should I use?’”

Adds Greg: “Most of her materials went across my desk – my designs, to her imagination.”

Both Tara and Greg are going for two of five seats in the same region, in the same Assembly. With the Hare-Clark system of government, they both have a chance of being elected. 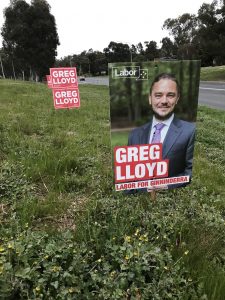 But I still wonder if the urge to slash each other’s tyres is in there somewhere. I mean, at the end of the day, you want to be the one that shoots the winning basket. You lend your team mate a spritz of deodorant in the change rooms for the good of everyone’s nostrils, but ultimately you want to be the one the college scout notices after the game.

Greg confirms my less-than-expert sports analogy but explains the entire Labor party works together for the greater good.

“It doesn’t make sense to spite each other,” Greg says.

“It’s actually not possible for us all to succeed if we’re fighting each other. I’m not close as to Yvette [Berry]’s or Sue [Ducker]’s or Gordon [Ramsay]’s campaigns, but it doesn’t make sense for me to ride past one of their signs and not put it back up. Because I need them to get votes too, if I want to get elected.”

Greg laughs as they both think about what their campaign managers will say when they read this, and I’m treated to a fascinating lesson on candidate non-collusion. 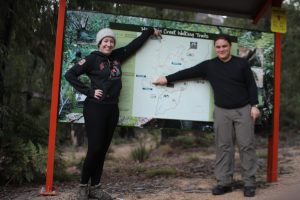 The friends way back in the early 2000s.

“She’s community-oriented, and people oriented, which is really important,” he says.

“There’s not much she won’t do to help people. I remember being waist deep in Lake Ginninderra mud, pulling out trolleys, and Tara holding my feet while I dangled over a pier to pick up a rubbish bin. Tara had just messaged me on a Sunday afternoon and said, ‘Let’s go pick up some rubbish, and we’ll go get a beer’.”

“His ability to solve problems is unrivalled and I think that he would be fantastic for Belconnen …. but I still want everyone’s number one vote.”

I explain my curiosity for their story, and how I can see they came from different towns in outback Queensland, connected as friends at Uni, came back together with separate interests and passions, and are now fighting for the same cause. Yet at no time in their entire friendship (spanning two decades), including during a time where they are fighting for the number one vote, have they ever held each other back.

“It’s very hard for one of us to succeed without the other succeeding in life,” he says.

“Like a lot of friendships, and maybe we’ll call it a ’co-supportive friendship‘, there’s no victory in one person being left behind.”

Canberrans head to the polls this Saturday 17 October 2020. For information on voting early head to https://www.elections.act.gov.au/

About the Author: Trish Johnstone

A graphic designer, Border Collie mum and classic 90s Sandra Bullock tragic, Trish heads up her own design studio, Oath & Stone. With a love of audacious advertising copy and printed magazines that use beautiful typography, Trish has been designing for Canberrans for over 17 years and loves uncovering the stories that make this town hum.