When Rory Jay Croker was born in June of this year, Raiders fans went a little bit crazy.

The first baby of captain Jarrod Croker and wife Brittney, Rory received a tonne of gorgeous gifts – all with a touch of green, of course.

From Raiders-coloured knitted blankets and tiny footy shorts to Raiders-branded cutlery for toddlers, the tiny Croker was already popular with Green Machine fanatics. 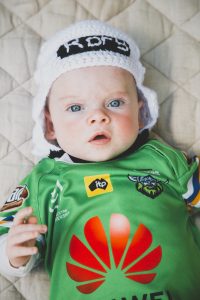 “Fans would drop stuff off at training for Jarrod to take home,” Brittney says.

A wardrobe that’s primarily green isn’t the only thing Rory shares with his superstar centre dad.

He has Jarrod’s “calm and chilled demeanour” Britney says; a quiet temperament to go with what are definitely his dad’s fair skin and blonde hair. Rory also has blue eyes just like both of his Goulburn-based grandads: Alan Wicks and Greg Croker. 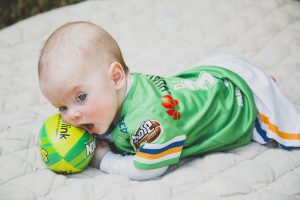 “I think the only look-in I got was his nose,” Brittney laughs.

Outrageously, Rory’s been sleeping through the night since just six weeks of age.

“I know other mums might resent me for saying this but I get more sleep now than I did before being pregnant,” Brittney says.

Dad’s energy on the field is definitely matched in the family home in the Canberra suburb of Giralang. The COVID Raiders bubble has meant Jarrod and Brittney have had lots of time indoors to bond with their new baby. Jarrod and his fellow Raiders players have been – and still are – housebound in their own private ‘bubbles’ since late March.

At four months, Rory is the centre of Brittney and Jarrod’s world. Photo: Jamila Toderas

“Jarrod’s incredibly hands on with Rory, in the early days he’d get up at all hours and just sit with us with a look of amazement on his face,” Brittney says.

Naturally, she’s hoping Rory inherits his dad’s sporting talent, but Brittney also wants her son to inherit her own talent for being creative and organised. Rory has lots of cousins on Jarrod’s side “to kick a footy around with” as he grows up, but is the first grandchild on the Wicks side. 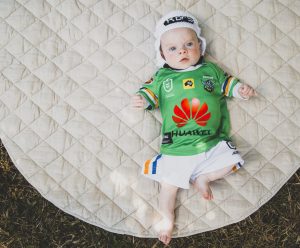 Rory will sleep through the match against Melbourne Storm on Friday night. Photo: Jamila Toderas

“It’s been hard for the grandparents as they haven’t been able to see him because of the bubble, but there’s a light at the end of the tunnel now.”

Like every Raiders obsessive, Brittney’s hoping the light at the end of that tunnel is a Canberra Raiders premiership. Jarrod’s feeling “excited” about the clash with the Melbourne Storm in Brisbane on Friday night, but expects the nerves will kick in on the flight to Queensland. 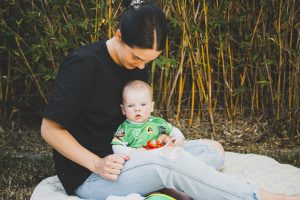 Little Rory will miss seeing his dad in the 2020 Preliminary Final on Friday night, however. He goes to bed at 7pm and kick-off is scheduled for 7.50pm.

“Mum’s going to grab a pizza and a wine and cheer dad on,” Brittney says.

“If we can back up the birth of our baby with a grand final win then I think 2020 may just have redeemed itself.”