The permed mullet she wore to her Year 10 formal at Kooringal High School is among the hairstyles Susie Oliver wishes she could forget.

“Actually, it was a sign of the times,” Susie laughs.

“And I certainly wasn’t the only one there with a mullet.”

Mum-of-three Susie is in for another new hairstyle – or lack of – on Thursday afternoon when she has her head shaved as part of the World’s Greatest Shave for the Leukaemia Foundation. It’s something she’s wanted to do for a long time, but never quite had the courage.

“2020 has been a year like no other – a lot of charities haven’t been able to get out there to fundraise, so I thought, ‘This is it. This is my year to make a difference’,” Susie says. 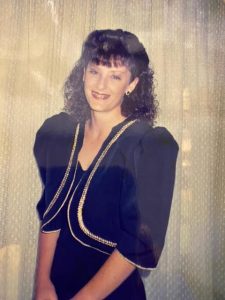 Susie will lose her locks at Priceline Pharmacy Queanbeyan on Thursday afternoon in a bid to raise $3,000 for the Leukaemia Foundation. She’s expecting quite the audience: from colleagues, friends and family to lots of Priceline customers who will also see pharmacy owner Felix Chan shave his head for leukaemia.

“I personally don’t know of anyone that has had leukaemia, but as a mum to three amazing girls I couldn’t imagine receiving that news,” Susie says. 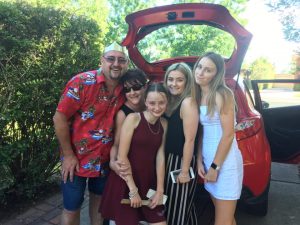 Susie with husband Michael and daughters (from left) Zoe, Holly and Caitlin. “I want to be a role model to my girls – I think it’s important to teach our kids the gift of giving.”

How does she feel about having the same hairstyle as The Rock for Christmas 2020?

“I’ve never been scared to try something different with my hair,” Susie says.

“I’ve had a number of funky hairstyles over the years, lots of different colours.

“I think the one thing that I’m most scared of is seeing how grey I am underneath.

“Also my eyebrows – I have one that seems to turn up at the end and so I’ll have to pluck them more than I normally do.”

“Any amount of money will make a difference in the life of someone going through leukaemia,” Susie says.

“It will support them, their families and more importantly the research to one day uncover a cure.”

A raffle is also being undertaken as part of Susie’s fundraising efforts, tickets available at Priceline Pharmacy Queanbeyan.