5 things all Queanbeyanites (and Canberrans) do down the coast

5 things all Queanbeyanites (and Canberrans) do down the coast

We hate to say it but the holiday habits those from Q-Town and the ‘Berra are predictable AF. We like our down time to mirror our mundane and predictable APS and trade jobs.

Q! News has compiled the complete list of sh*t every holidaymaker does during a trip to the coast.

1. Stops for a wizz and a pie at Braidwood Bakery. 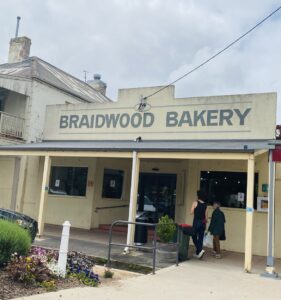 It’s well known that travelling to the coast requires at least one toilet stop.

Even better if you can pair draining the dragon with a meat pie and choccie milk. Jagging a park right out the front of the bakery in peak season is an endorphin rush I’ve only heard talked about in CrossFit circles. Braidwood Bakery may be a staple coast trip stop, but it’s definitely not a new tradition. The bakery has been around some odd 87 years!

Its delicious pastries hit the spot every single time and provide a nice reprieve from the kids whingeing before driving through the Monga Mist. The bakery renovations in 2006 saw the bakery double in size, but now they have even bigger plans to move from their location in Wallace Street and quadruple in size! Stay tuned to Q! News for that story!

2. Yells out the window when coming around Pooh Bear bend. 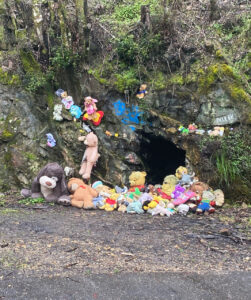 Blink and you’ll miss this one or if it’s foggy, forget it. The kids always chime in unison: “Pooh Bear’s Corner!” when coming into that second bend on the Clyde. It’s the main attraction on the mountain, besides that one sibling who always spews up their Braidwood Bakery treats.

The kids all rubberneck out of the windows to see what the fuss is about. “That’s where Winnie the Pooh lives!” yells Dad as the teenagers groan about a bunch of sad-looking bears stuffed in a hole in a cliff face. The Corner also signifies that you’re well on your way to being dunked by your first wave at Denhams Beach. 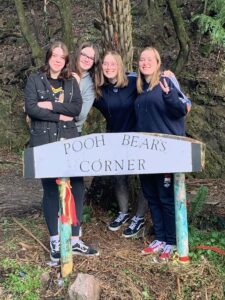 Apparently this tradition has long roots as well and was started some 50 years ago by Barbara Carter whose, children loved the Pooh Bear books. The family erected a temporary sign that was eventually replaced by the Eurobodalla Shire, and would later be destroyed by fire. We must admit as much as we love this tradition the corner has absolutely seen better days … petition to revamp Pooh Bear’s Corner anyone?

Takes a trip to Mogo Zoo despite the cost and sweating bullets for hours. 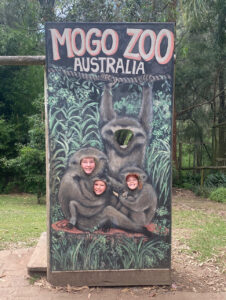 This a more recent tradition – for our family at least – borne from incessant pestering (akin to “Can we go to Mt. Splashmore?!” from The Simpsons). It’s not cheap either. A recent trip with three kids set me back just short of $300 including food (for the animals and humans) and a mood ring from the gift shop. 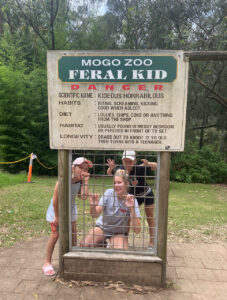 It’s hot and dusty and reeks of animal sh*t, but the kids LOVE it. On the upside you can use NSW Dine & Discover vouchers to bring down costs AND the staff are lovely. When an ostrich ate my daughter’s Zoo passport they gave her a new one and stamped it for her in the gift shop!

Reckons this is the year they’ll “get a van at the coast”. 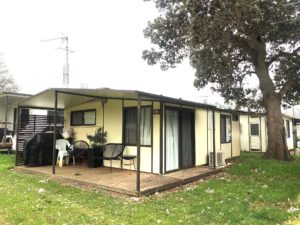 Two days in and guaranteed you’ll be strolling the park thinking how “it wouldn’t cost that much” to have your very own van at the BIG4. You’ve seen Jenny relaxing on her personal porch every night with Moscato and a Danielle Steel book in hand and – dammit – you want that kind of reckless abandon in a holiday. “We could come down every weekend, we’d actually be saving money, we wouldn’t have to book or anything!” you say.

It’s a tempting thought to escape the frost and the eshays whenever the mood arises but trust me when I say, I’ve done it and it’s bloody expensive. A decent van will set you back around $40k and the rates are outlandish. There’s also the small things like, YOU HAVE TO CLEAN IT YOURSELF. Total stitch up. If you’re seriously considering it, you can read all about the pro and cons in our previous story.

Stands in line for four hours at The Boatshed. 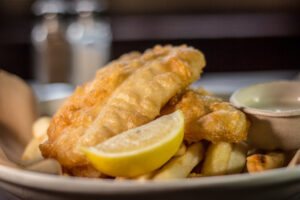 If you don’t post about your fish and chips at The Boatshed on a weekday with the caption “How’s your Monday going? Haha” did you even go to the coast?

Higuma2017 says it best on Tripadvisor:

“Yes, it may be more expensive than your local shop around the corner. And yes, the staff need to be trained to appear a bit more welcoming, and yes, aioli is not really mayo and 2 dollars for a bottle is a bit of a rip off … But old Slim Dusty was right. It’s indeed the best tucker on the track.”

If only Ubereats would pick it up and drive it back to us here at home.