Two years in the making, there are some very famous bums in new Queanbeyan calendar

Two years in the making, there are some very famous bums in new Queanbeyan calendar

Gillian Southwell can’t forget the very first shoot for the Men of Queanbeyan calendar – not because some very famous Queanbeyan men got their kit off (although they did) – but because it was scorching hot, and flames were raging on the south coast and right up to Braidwood.

“The men were happy to strip off, I think, because it was just so so hot. It was a scary time.”

Fast forward two years and the long-awaited calendar, featuring more than 150 Queanbeyan blokes, is finally printed and ready to launch at a huge party at the Queanbeyan Showground on Saturday 19 February. 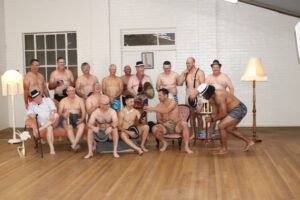 So many famous faces, so little time …

After months and months of delayed photo shoots and three separate attempts at a launch party, Gillian and the calendar team “just can’t wait to get the very special memento out and onto the walls of Queanbeyan homes”.

The calendar is a fundraising effort for the Respite Care for Qbn foundation and stars some of Queanbeyan’s finest – from Queanbeyan Blues greats Keni Kawaleva and Sheppy Stonham to older lads like Peter ‘Butcher Lindbeck’ and Rocky Burnell. 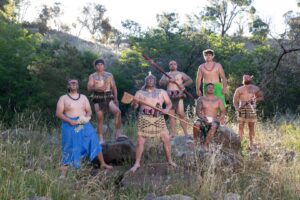 I spy a Gafa, a Cotter and a Roukura!

“It’s hilarious and fun and captures how Queanbeyan really gets around a good cause,” Gillian says.

“The shoots were very lively to say the least. There were definitely times people were crying with laughter.”

Photos within the calendar are set in some of the region’s most iconic locations, from Seiffert Oval and the Queanbeyan Showground to the old Captain’s Flat mine. The calendar was the logical next step following the runaway success of the Women of Queanbeyan calendar in 2019. The womens’ calendar raised more than $80,000 for Canberra region cancer support group Rise Above – the original goal was $20,000 – and organisers want to top that figure with the blokes. 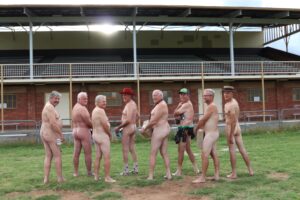 Well these legends of Q-Town understood the brief!

There will be many people to thank on the night of the launch party, Gillian says, from the stars of the calendar to the photographers who donated their time and the calendar committee itself.

But for now, the best way for Queanbeyan people to get behind the effort is to buy a ticket to the launch party on 19 February. It’s a roaring 20s themed event (remember the calendar was originally due to launch in 2020) and every ticket includes dinner, alcohol and live music by local band BlindSided.