‘It’s in my blood’: jockey Ryan Bradley looks to follow in pop’s footsteps

‘It’s in my blood’: jockey Ryan Bradley looks to follow in pop’s footsteps

A 15-year-old Ryan Bradley would have told you his dream was a grand final winning chip-and-chase in the NRL.

But talk to the 18-year-old today and he’s ditched the dream of chasing a ball around a paddock. His new obsession is horses, and he dreams of being a Melbourne Cup-winning jockey.

A Queanbeyan local, Bradley grew up playing for the Queanbeyan Blues alongside older brother Hayden. But the brothers were also regulars at the track, attending race meets with dad Brenden and hanging around the stables. 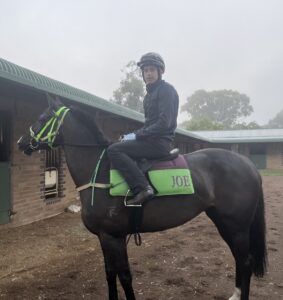 At the age of 16, the Karabar High student, fed up with footy injuries, jumped on the opportunity to become an apprentice jockey. Bradley was put through his paces at the Winterfold Stables on Melbourne’s Mornington Peninsula, learning the ropes of jockeying. It was tough going.

“The early mornings in Melbourne were hard to get used to, we had 3am starts,” Bradley says.

“I ended up being there for 19 months. It was a big stepping stone and a massive learning curve for me.

“I owe a lot to my family for helping to get me through my apprenticeship.”

Horses are in Bradley’s blood. He comes from racing royalty on his mum Natalie’s side, with his grandfather Henry Cartwright and uncle Rikki Cartwright both former successful jockeys.

“I’m following in my grandfather’s footsteps … I loved seeing all my pop’s trophies and watching my uncle Rikki on the TV.” 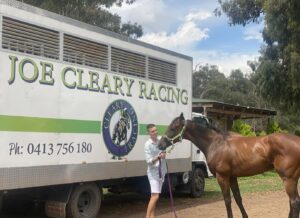 Bradley admits the training has sometimes been brutal. A fall last year saw him sidelined for weeks with a dislocated shoulder. While most 18-year-olds are partying at Walsh’s, Bradley is in bed early and watching his weight.

“My minimum weight is 51 kilos which isn’t too hard for me to maintain, but a lot of people don’t realise how fit and strong you really have to be,” he says.

A self-proclaimed “mummy’s boy”, Bradley was homesick after being stuck in lockdown for most of the time of his apprenticeship in Melbourne.

Wanting to get back to his roots, his strong connections within the Queanbeyan Racing Club saw him link back up with local Queanbeyan horse training legend Joe Cleary.

“Joe is basically an uncle to me and he made me an offer to come back and I took it with both hands,” Bradley says.

After three years, Bradley is on the verge of getting his jockey ticket and is champing at the bit to get out and ride. He hopes to ride some winners in Queanbeyan later this year, and would love to take out the iconic Queanbeyan Cup like his pop Henry did. 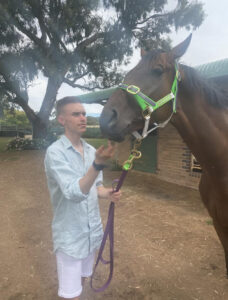 “Mum wasn’t too keen, but it’s her family that have influenced me so we can kind of blame her,” he says.

The Braidwood Race Meet, on this Saturday 5 February, is set to attract around 1500 racegoers from around the region. Queanbeyan’s Joe Cleary Stables will be fielding a number of geldings, including Samindi and Ajeti, with horse Hardcore running in the cup.

“Old Hardcore is in the cup, the old fella, he’s been around as a long as I can remember and he’s a bit of a stable favourite, if we can get the cup home it would be pretty exciting,” Ryan says.

Infamous Queanbeyan horse Epaulo Creed, part owned by some of the Queanbeyan Blues players (including Terry Campese) will take to the track in The Maiden Plate (Race 6).

“We’re pretty positive with this fella. He’s going in with a good frame of mind,” Bradley says.

He predicts a great day out at the track with good crowds: “Now that COVID has dropped off and the crowds are back it’s a much better atmosphere.”