At age six, a very small Joash Tore’eke Molia Taufa’ahau started walking to school on his own.

“My parents raised me with a lot of independence,” he says.

“I remember very vividly that mum walked me to school for one year – that was kindergarten – and then after that, and I could barely speak English, she would just let me walk to school on my own.

“From a young age they gave me that ownership and independence.” 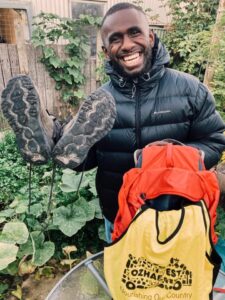 That independence is a big part of who Joash, now 20, is today. With maturity beyond his years, the 2022 Queanbeyan Youth of the Year and active humanitarian literally has our city in the palm of his hand.

Joash arrived in Queanbeyan in 2005 from the Solomon Islands, along with parents Florry and Bill and four siblings. He grew up on Mowatt Street and spent his formative years attending Queanbeyan East Public School – where he not only learnt to speak English but grew into an exceptional role model for the his fellow students, becoming school captain in 2012.

He then attended Karabar High, where his leadership skills again made him popular among his teenage colleagues. Even the teachers loved him. 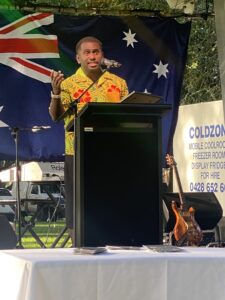 Joash speaks at the 2022 Australia Day ceremony in town park.

When he finished school in 2018, Joash didn’t have a clue what to do “for a career” so he returned to the one thing that came naturally to him – helping and inspiring young people. He became an SLSO (School Learning Support Officer) at his former primary school, Queanbeyan East.

“When you finish school there’s this mad rush to get everything done,” he says.

“I really wanted to go to university but I didn’t want to go to uni and pursue a course that I was never going to truly invest myself in.” 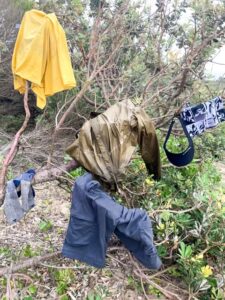 Drying off clothes during the “Hike for Hunger”.

When Joash’s dream to hike the Pacific Coast Trail in the US, inspired by Cheryl Strayed’s acclaimed novel Wild, was quashed by COVID in 2019, he turned his ideas closer to home. He studied maps of Australia for hours and eventually decided to walk the east coast of his new home nation.

“I’ve always loved to hike, it’s just a slow way to see the world,” he says.

Inspired by friends on Facebook, who were taking on ‘physical challenges’ for charity, Joash incorporated a fundraising goal in his 1400km quest along the coastline. It became the “Hike for Hunger”.

The walk taught me that no matter how long it takes to get there, I will still get there. It’s about slowing down, and breathing.

“OzHarvest came to mind because working in the hospitality industry you see so much food getting wasted,” Joash says.

“Many people, including in our own country, don’t get access to good food.”

In December 2020, he left Coolangatta, Queensland, with the far south coast of NSW in his sights. He set himself the goal of walking at least 50km every single day to reach his destination. He would set up camp for the night “whenever my legs gave up for the day”; sometimes in beautiful bushland and other times a concrete truck stop.

“All I had was Google maps, I just headed south, ocean to my left and land to my right,” he says.

Sticking to the trails as much as he could, Joash would often wander through towns and along busy roads.

“There was a point where I was followed by dingoes, so there were times all throughout it where I was scared, but I just had to kind of accept it. 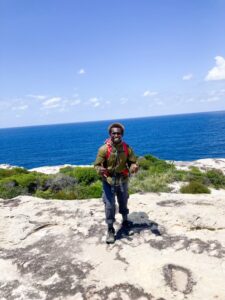 Throughout his hike, Joash often relied on the kindness of strangers for food and shelter. His Mum Florry was back home in Queanbeyan holding down the fort after his dad Bill had sadly died in 2018.

“When I was walking, people always asked, ‘Does your mum call you often?’ – I think she called me maybe three times.

“She had that weird faith and she trusted me from giving me that ownership.”

By the time Joash reached Eden, NSW, after a mammoth four months of walking, he had raised almost $8,000 to feed vulnerable people across Australia. 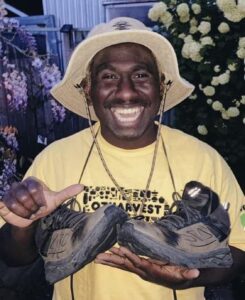 One year on and he’s still reflecting on his journey. He had “an extraordinary amount of time to think while walking” he says, and is still pondering the big stuff.

“I’m still definitely learning lessons from my walk,” he says.

“When I came back [from my hike] a lot of my friends had full-time jobs and were making big decisions for their age.

“I almost felt like I had to play a game of catch-up but the lessons from the walk taught me to just slow down and breathe.”

In the 12 months since the walk, Joash has been contemplating his next adventure. He went to South Australia to potentially purchase a boat, but settled on a Land Rover (“Which was probably good because I don’t even know how to sail!”)

His vision is to turn the Land Rover into his home and move closer to the ocean.

“I hope that’s the way I pursue my life, to slow down,” Joash says.

“There is time. It’s a short life but there is time to get things done.

“Forcing them on yourself won’t achieve anything … I would love to continue my adventures either on water or on land. For me, there is always a next adventure.” 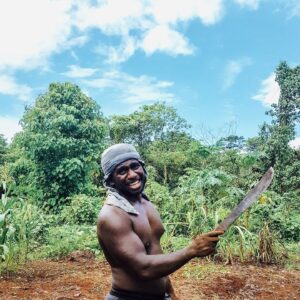 Joash during a visit to see his grandmother in his native home of Munda in the Solomon Islands.

Does his Pacific Island heritage play a part in the man he is today?

“Culturally, there is definitely that element of adventure and I want to carry that on, I don’t want to just let that die,” he says.

“Even though I’m in a new country, I still want to have that spirit that I have when I’m back home.

“The walk has haunted me but taught me no matter how long it takes me to get there, I will still get there.”