‘It will take someone special’: Tony Wood on one day handing over his Victor the Viking suit

‘It will take someone special’: Tony Wood on one day handing over his Victor the Viking suit

Lime green Woodgers jerseys, tight jeans and mullets are in abundance and the smell of grass, deep heat and meat pies fills the air. The Canberra (Queanbeyan) Raiders are playing to a roaring crowd as kids collect tin cans for cash. A scary-looking man in a Viking suit stands on the sideline, punching the air as the Raiders score their third try of the game. 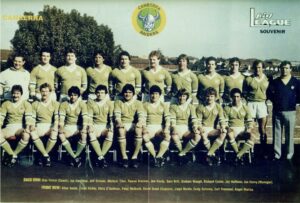 The Raiders’ history is long and illustrious but only one man has stood the test of time: Tony Wood. He’s spent the last 39 winters playing his alter ego, Canberra Raiders mascot Victor the Viking, and says it’s been a heck of a journey; not without its trials.

“About three years ago the Raiders sent the costume off to get fixed and when it came back it had mesh eyes in it,” he says.

“I couldn’t see a thing. I needed a minder to go around with me. So I went back upstairs and I got some scissors and stabbed the eyes out.” 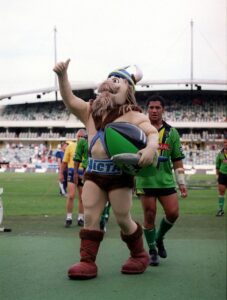 Tony, a client liaison officer for BaptistCare when he’s not in the Viking suit, recalls the very day he started with the club.

“I used to run those big green Murray’s buses to the away games in Sydney,” he says.

“Western Sydney had this great mascot. On the bus on the way home we said ‘we need one of those mascots’.

“So we started thinking about names and someone said ‘what about Rupert Raider’. A  friend of mine, John Corcoran, thought of the name, he said what about ‘Victor the Viking’.

“I rang the Leagues Club and set up a meeting with [then Raiders General Manager] Les McIntyre. I’d only had the Viking head made so I called into the sports shop and got some shorts and a jumper from Denis Reid – and that was Victor’s outfit.

“I walked into Les McIntyre’s office and it was like Kerry Packer’s office, dark and smoky … he turned around and said ‘ok I can give you two tickets for this weekend’s game’.

“I remember him saying that like it was yesterday, and that feeling, I felt like a king.” 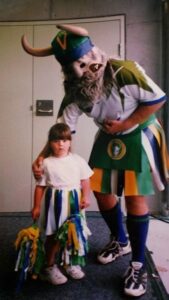 This year marks the 40th anniversary of the Canberra Raiders NRL Club, a huge part of Queanbeyan’s history and culture. From the glory days of Seiffert Oval and the players “mucking up” at Queanbeyan Leagues Club, Victor has seen them through it all. The club’s transition to Bruce (GIO) Stadium, the Super League days and now a pandemic.

“It’s a very special time – 40 years is a lot of memories and a lot of special things that have happened, they’ve only won four premierships but they’ll always be remembered,” Tony says.

The Victor suit itself has had more transformations than the NRL, from the super scary to the downright impractical. The suit came from humble beginnings in Queanbeyan.

“Bronywn Huxtable made the first ever Victor the Viking costume, with the help of the kids at the Karinya Handicap Activity Therapy Centre,” Tony recalls. 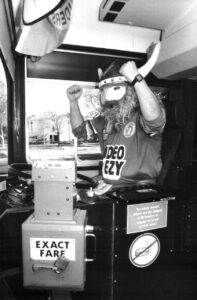 When the paper mache head started to fall apart, Tony consulted a Queanbeyan business who’d made the fibreglass statues at the war memorial for a sturdier option.

To commemorate the 40-year anniversary Victor “Tony Woods” Viking is compiling his best ever Raiders team. The Raiders have seen some of the best players to take the NRL field – from Belcher and Croker to Papalii and Furner – but Tony says his GOAT team is composed not of the most skilled, but of the entertainers, the ones that brought the crowds back again and again. 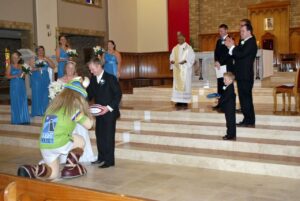 “Someone said to me – you’ve seen a lot of players over many many years, who would be your favourite? But I’m not picking my favourites or the best players, I’m picking the players that most excited me,” he says.

“I have the best seat in the house. These players that I’m picking excited me … like Chicka Ferguson, who’d play his heart out and then go into the dressing sheds at half-time and have three or four Winfield Reds.

“But he’d come out and was able to run like you wouldn’t believe.” 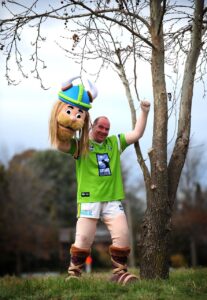 Tony holds his Raiders memories and memorabilia close to his heart – “I’ve always said this job is all about smiles, it’s the smiles you create” – and in recent years the very real threat of bushfire has seen Tony’s family evacuate his Raiders collection twice.

“I said to my kids, if there’s ever a fire, save all my Raiders stuff,” he says.

“I happened to be up in Queensland when there were fires in Oaks Estate – the kids had to get the three cars just to get all the stuff out.

“When I got home the kids said, ‘there you go, we’re not putting it back’.” 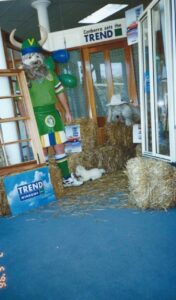 This year’s 40th anniversary celebrations include a players reunion and an exhibition at the Canberra Museum and Gallery. The display is now open and features a selection of Victor’s costumes over the years.

When asked if he’s thinking of retiring as Victor after 40 years, it’s obvious Tony has no intentions of giving up the top job.

“Why would I give it up if I’m still enjoying it?” he says.

“It’s going to take a very special person to take over.

“I can see the interview process now – I’m going to have a Stanley knife and if I cut your arm and you bleed green, you’ve got the job.”