It’s a Tuesday night and I text Kristy McBain a YouTube link to the trailer for Baz Luhrmann’s upcoming movie epic, Elvis.

“Just in case you haven’t seen this,” I write.

She responds within minutes.

Kristy McBain, federal member for Eden-Monaro and mum of three, is obsessed with Elvis Presley. Like, ‘I forced my brand new husband to take me to Graceland for our honeymoon’ obsessed. (She did.) At the age of just 39, I don’t get it. 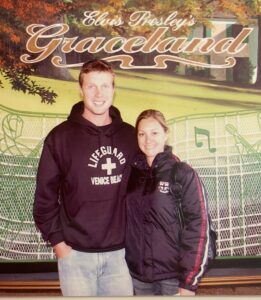 Newlyweds Brad and Kristy McBain on their honeymoon at Elvis’s home.

“I was sick one day and had to stay home with my nan, who only ever watched the Midday Movie and then Wheel of Fortune later in the day,” Kristy explains.

“And I didn’t want to go there because she wouldn’t let me watch telly.

“I started listening to his music and watching more of his movies. And my obsession just grew as I got older.

“I remember being in my twenties, I was such a geek, we’d have drinks and head back to my place and I’d be like, “Let’s watch the ’68 Elvis Comeback Special’. And it’s this DVD of an Elvis concert.

“Must have been fun to be my friend.”

We’re sitting in Kristy’s office on Monaro Street for a chat. It’s incredibly formal. A huge mahogany desk commands the room; a giant map of the Eden-Monaro electorate and a framed Queanbeyan Whites jersey adorn the walls. A huge Australian flag together with a framed letter of congratulations from Julia Gillard remind me that I’m in the presence of a member of federal parliament. 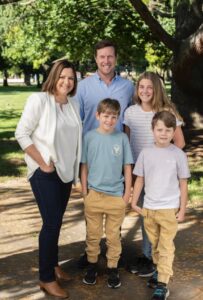 Kristy and Brad with children Max, Ruby and Jack.

But Kristy is anything but formal. She’s sitting at a meeting table to the side of the monstrous desk, flicking through photos of herself at her debutante ball in 1999.

“Jeez I was a stunner,” she says sarcastically.

Kristy’s not like the other politicians I’ve interviewed; stuffy and rehearsed and terrified to say anything that hasn’t been pre-approved by a media manager. She describes being sworn into Parliament as “being walked down the aisle – there’s members of your party either side of you and you even say ‘I will’ at the end’.” She recalls the moment of disbelief when she first sat in parliament.

“It was just before Question Time,” she recalls.

“And I was like, ‘I’m going to get kicked out any minute. Someone’s going to realise I’m not meant to be here’. Like just looking around going, ‘I can’t believe I’m here. This is weird.’”

Kristy is happy to challenge the ‘pale stale male’ perception of federal politics.

She was born in Traralgon in Victoria but became a Merimbula girl when her family moved to the NSW south coast in 1994.

She was the classic 1990s all-Australian girl. Good-looking with tanned skin, sporty and a major obsession with Silverchair (to go with her Elvis obsession, of course). She played basketball and netball to hide the fact “I was actually a nerd”, and badly wanted to study journalism after school but found herself undertaking a law degree at University of Canberra. 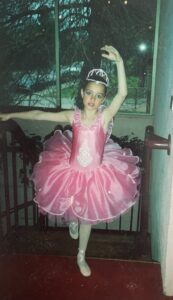 A young ballerina in her home town of Traralgon, Victoria.

Other than joking that she wanted to “be the first female Prime Minister of Australia” (she shares the same birthday as Julia Gillard, go figure) a career in politics was never on her radar.

That was until 2012, when she was wrangling a toddler while pushing a baby in a stroller and she saw a decision about a local playground that made her incredulous.

“At the time there were eight men and only one woman on the local council and they were all over 55 and I was like, ‘How the hell have they made this decision? This is insane.’

“There was an election coming up so I was like, you know what, bugger it, I’m just going to put my hand up and run myself because we need younger voices on council, and more women. Council should be open to making decisions for all of the community, regardless of age demographic.”

She was elected to Bega Valley Shire Council and within four years became the council’s mayor. It wasn’t an easy tenure. During her almost four years in the top job, there were nine declared natural disasters in the Bega Valley – including the loss of 69 homes during the Tathra fires of 2018. She unintentionally became an expert in disaster management.

“The thing that I realised really quickly is that people need information and far too often people in power or positions of influence try to keep information to themselves,” she says.

“So we tried to set a really transparent view of what was going to happen and when, because people needed information.” 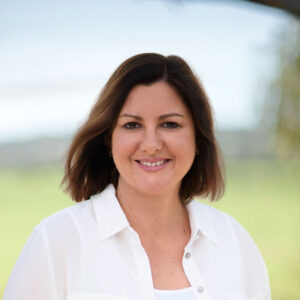 Her exceptional communications skills and deep commitment to the south coast region caught the eye of one Anthony Albonese, head of the Australian Labor Party and leader of the opposition. On a visit to Merimbula in 2020, he left his plane idling on the runway at Merimbula Airport to ask Kristy to run as the Labor candidate for the seat of Eden-Monaro.

Kristy’s conversation at bedtime that night with husband (and high school sweetheart) Brad was fraught.

“I said to Brad, ‘Well, it’s just not feasible, is it? Like the kids are too young and we have a business to run?”

“And Brad said, ‘Are you kidding me? You’ve just been asked by, potentially, the next prime minister of Australia to run for the Labor Party party in an electorate that you know, that you love, that you went to school in, that we live in, that you work in – you’d be crazy not to do it. What if this opportunity never comes around again?’

“He said, ‘We can make anything work. So if you want to do it, I think you should do it.’

“And I was like, ‘Wow. Okay.’ And realised I actually really wanted to do it.”

Since winning the seat of Eden-Monaro in July 2020, Kristy’s racked up 86,000 km visiting the cities and towns across her diverse electorate. But what she’s really good at is walking into people’s offices at Parliament House in a bid to “just get things done”. 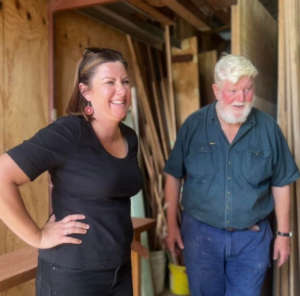 On a visit to the Tumut Men’s Shed earlier this month.

“I will literally walk into a minister’s office, knock on the door and say, ‘Hi, I want to see so-and-so now’,” she says.

A lot of the time she’s barging into offices to further the plight of those Eden-Monaro residents who lost their homes in the 2020 fires.

“There’s been over a thousand homes lost across the electorate and less than 10 per cent of those homes have been rebuilt,” Kristy says.

“It’s nice to fund community activities or economic development opportunities, but what we really need to do is to get these people back into permanent accommodation.

“There’s been a whole bunch of money funded for mental health support, which is fantastic, but only if you can access a psychologist or a counsellor – which most of these people can’t.

“The biggest thing that would help their mental health is to actually get them back in a house.”