If Queanbeyan was a bloke, surely it’d be Jeffery “Rocky” Burnell.

A well-known sportsman and philanthropist, Rocky’s contributions to the Queanbeyan community are abundant, and the story of how he became known as Rocky is as entertaining as the man himself.

“As a young fella I copped a few knocks to the melon at footy, so it started out as ‘Rockhead’.

“I then proceeded to touch up a few Canberra idiots because they hated us 2620 fellas, and at that point the nickname shortened to Rocky, like the Sylvester Stallone character.” 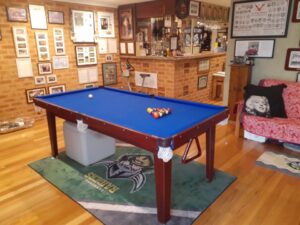 The interior of the Rock Inn.

Rocky’s historic Queanbeyan residence on Albert Street was built in 1953. Set behind the fire station on a double block (yes that means double the rates), the house was built smack bang in the middle of both blocks. It’s is an example of the functionalist style, with a flat roof concealed by a parapet and rounded brick corners.

Rocky’s man cave, aptly named the “Rock Inn” was built as an entirely separate dwelling out the back of his home in 2009. Featuring a brick and timber interior, Rocky said he wanted a timeless look for his oasis.

“It was a bloody long time in the making,” he says.

“I had the Rock Inn sign made five years before I even thought about building it.” 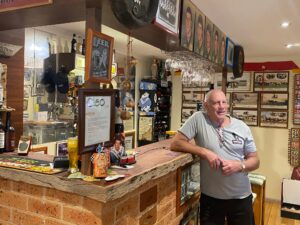 The bar features ‘convict bricks’ made in the 1850s for the construction of the original Walsh’s Hotel.

Step inside and you’re immediately surrounded by walls covered in memorabilia from the last seven decades. From newspaper clippings and signed photos to drawings, certificates and more. Most are beautifully framed by the Rock himself (he did a course in framing to be able to preserve all his treasures).

“I just wanted a pool table and bar, and to be able to get my mates round and have a party whenever I wanted to.”

Sports paraphernalia makes up the bulk of Rocky’s man cave collection, including but not limited to NRL, horse racing, Queanbeyan Roos and Blues momentos, City to Surf certificates and photos of a basketball team named The Queanbeyan Commodores.

The walls are also covered in accolades for his charity work and memories from Rocky’s own personal sporting achievements. 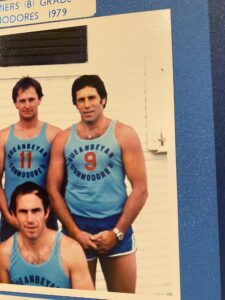 Rocky playing for the Queanbeyan Commodores basketball team in the late 1970s.

“I’ve played a bit of everything,” he says.

“I had a little dabble in tennis. So, you name the sport and I did it!”.

Mix in a few cheeky calendars and the classic ‘dogs playing poker’ picture and the Rock Inn stands out as one of Queanbeyan’s best man caves.

While he loves “everything about it”, Rocky admits the bar in his man cave is pretty damn special.

“It’s got some convict bricks with their insignias, because they couldn’t read or write so they’d put a diamond, heart, spades or club, so I got the brickie to whack them in.

“The wooden bar top was given to me by my mate Chookie Warner, he had it out the bush for me and dried it out for me for five years. He rang me and said it’s dry now you better come and get it.” 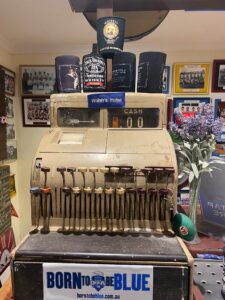 An old till from Walsh’s takes pride of place behind the bar.

Rocky’s absolute treasure trove of Queanbeyan and sporting history is second to none. Decades of collecting and preservation have gone into the man cave and have no doubt provided countless hours of talking points to its many visitors.

“I’ve been collecting this stuff over the years and when they did the renovations at Walsh’s in 2000, I grabbed all that and made virtually a mini Walsh’s,” he says.

“I even grabbed their old till, it was in the bin and I got it out.”

His career as a former book binder for the ACT Government Printing Office came in handy when he bound hundreds of editions of very early rugby league magazines.

“My Rugby League Weeks, I’ve bound them up by hand with all leather covers, because I was a bookmaker by trade, they’re worth a lot of money and they’re my pride and joy.” 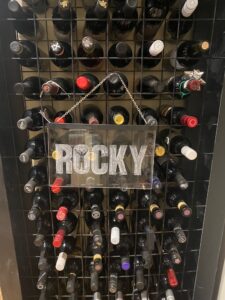 There’s not a tipple he doesn’t stock in the man cave, Rocky says, from reds and whites to Bundy Rum and Midori.

A father of  four, Rocky’s third child Kyle was born with Down’s Syndrome more than 20 years ago. Kyle inspired Rocky to be the driving force behind the formation of the Queanbeyan Special Needs group.

“Kyle was one year old … so I got off footy committees and then went onto the special needs committee to raise funds, because they didn’t have enough to deliver the services they wanted to for the kids.”

Rocky’s tireless fundraising efforts for the group provided much needed-funds and early intervention services that the kids of Queanbeyan would otherwise have missed out on. His most recent charity work includes raising money for Rise Above and the Respite Care for QBN Foundation, through the release of the Women of Queanbeyan and Men of Queanbeyan calendars (yes he had to nude up for latter). 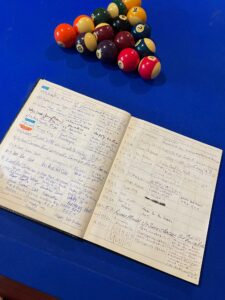 The Rock Inn Visitors Book is a who’s who of Queanbeyan and the region, including Dave Furner.

“Yeah look, any charity going on, I’m happy to put my hand up and get in and get involved,” Rocky says.

On our way out of the Rock Inn we couldn’t go past an article hung by the door featuring Rocky’s appearance in the video for the song Bloke by Chris Franklin.

What a bloke Rocky is: a family man, sportsman and a man of the community.

We reckon you’ll have a hard time finding a better man cave in Queanbeyan – and if you get the chance to stop in at the Rock Inn for a drink, think yourself very lucky!