“Dad and Tim are huge influences”: Dan Hawke on the role of family in his coaching career

“Dad and Tim are huge influences”: Dan Hawke on the role of family in his coaching career

It’s a well known fact Queanbeyan has produced some stellar sports stars over the years, but behind the scenes our residents have also been shining: in the coaching sheds, on the sidelines and in the administration buildings, where teams and clubs are built from the ground up.

Dan Hawke is one of Queanbeyan’s ‘behind the scenes’ legends. He’s the current head coach of the Brumbies’ Super W women’s team – a role he loves, even though the women consistently ask “why?” when he sets a new physical challenge. 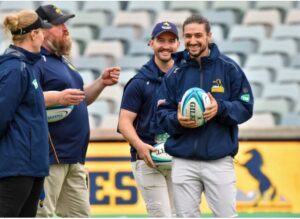 “I learn something new every training session,” Dan says.

“The level of feedback is different to the type of communication with men, the women want to know the ‘why’ of everything we do.

“I’ll make a mistake every week but I always learn from it.

“It’s a massively rewarding process and my coaching in the past 12 months has grown significantly from working with the Super W team – without coaching the women I would never have experienced anything like that.”

If you grew up in the Crestwood area in the 1990s then you definitely know the legendary Hawke family of Begonia Place. Mum Sandra and Dad Phil raised their family of three in the quiet West Queanbeyan cul-de-sac. Kids Melanie,Tim and baby brother Dan went to Queanbeyan schools for most of their schooling despite Phil being a head teacher at St. Edmund’s College. 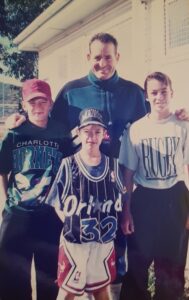 A young Dan Hawke gets some tips from David Campese in the 1990s along with brother Tim Hawke and friend Rohan Spiteri.

“My brother and sister and I have all done teaching degrees, my brother started and then went and did a trade and then he saw me do mine and that made him want to come back and finish,” Dan says.

Dan’s obsession with sports was not unusual in the Hawke clan.

Dad Phil held both playing and coaching roles at the Queanbeyan Whites, Queanbeyan Blues and the Queanbeyan Tigers. Dan’s brother Tim ultimately inspired a young Dan to make the switch from league to union. 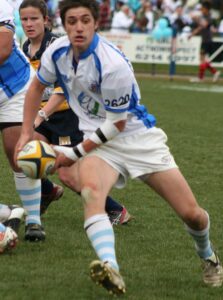 Dan in action for the Queanbeyan Whites.

“Dad and Tim have definitely influenced me – don’t get me wrong, Tim and I used to fight all the time growing up but I think once you get older you realise the values that you have and you realise your siblings have those exact same values and you become best mates and now we talk every single day.”

After completing his degree, Dan moved quickly through the PE high school teaching ranks, starting at Dickson College and then moving up when a specialised job opened up at Erindale College in 2014. 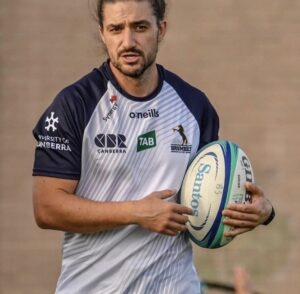 His coaching outside of school had also progressed from helping dad Phil with the Under 15s team to “coaching the Under 18s ACT School Boys which, was a real step up and we were lucky enough to win the national comp in 2017, from there that just spiked my interest in being a successful coach.”

In 2019, Dan approached the Brumbies and expressed a desire to get involved with the Academy Program, developing the skills of semi-professional players and helping them get signed to a club.

“I’d coach the Whites Tuesday, Thursday and go out to the Brumbies Monday and Wednesday, then in 2020 I came onboard as an assistant Academy coach.”

Dan’s dedication to the Brumbies was rewarded when he was last year named the head coach of the Super W Competition women’s team. 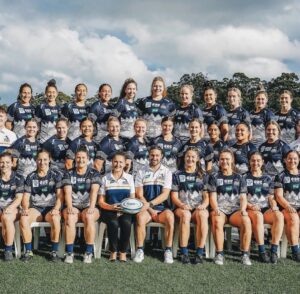 “Last year was quite disrupted because of COVID,” he says.

But his belief in his team for 2022 is enormous.

“Our captain has four kids and travels five hours each way to get here, she’s the most amazing woman you’ll meet,” he says.

“The toll and sacrifice that the players are willing to make and to do for the program and to play at that higher level, it just puts things into perspective, you can’t thank them enough.”

Dan has a huge amount of respect for the women on his team and women’s sports,

“The TV numbers and crowds have been really high for women’s sports – we have one game a week now on live TV on free to air,” he says.

“Two years ago, none of my players would have thought that was possible. It’s just an evolving beast at the moment and awesome to see how proud some of the older players are that they pioneered all this.” 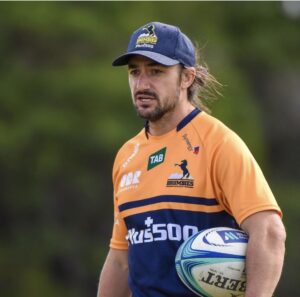 When one thinks of Queanbeyan Rugby Union royalty the name Ricky Stuart probably isn’t the first to come to mind. But Dan says Ricky’s been a very generous mentor and has guided him during his professional coaching career.

“Dad taught him and growing up Dad would take me to his old man Les’s house and Dad and Les would catch up and then it turned full circle when I coached both of Ricky’s kids,” he explains.

“The other day I was struggling a bit with some stuff with the team and some results and Ricky called me that night to give me pointers, so I still look up to him.”

What does the future look like for the young Hawke?

“Long term, I’d love to coach professionally, and the more time I spend in the coaching environment, the more I want to be in that environment.”