Recognise the background in this stunning, award-nominated image?

Recognise the background in this stunning, award-nominated image?

Whether you ran up and down the steps as a kid or whispered at one end of the arch to see if you could be heard at the other, the little half dome in Queanbeyan Park is a quirky little landmark of Q-Town.

Its “simple yet impactful shape” made it the perfect backdrop for a photo recently entered in the National Photographic Portrait Prize by local photographer Grace Costa. 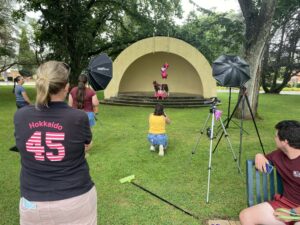 Behind the scenes of the photo shoot.

“It has a grand presence about it,” Grace says.

“The little stage showed instantly that it was a possibility for me to build a story around it.”

The stunning image, titled Daisy & Maverick, is the second in a series of photos by Grace titled Urban Horse, exploring a horse’s place in our modern world. The series started in 2020 with Jesse & Frankie, taken out the front of Manuka Pool.

“You will notice I have a thing for red-haired girls – both my models have red hair.” 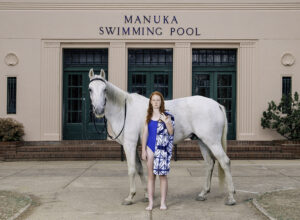 “He actually spends a lot of time visiting nursing homes around the capital. I knew he would be the perfect little horse model who does what he is told and he lived up to that expectation.” 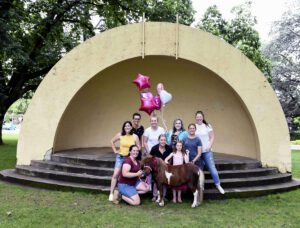 The crew behind ‘Daisy & Maverick’.

The hardest part of shooting on the steps of the little half dome was “getting all the legs to line up”, Grace says.

“Just trying to get Maverick’s four legs standing evenly and then the feet of Daisy posed perfectly at the same time – it was hard,” Grace says.

“I don’t photoshop my images if I can help it, so that means taking a lot of shots to get the perfect frame where everything lines up nicely.”

While the image wasn’t successful in the National Photographic Prize, it will be entered into other national photo awards. In 2020, Jesse & Frankie was a finalist in the international Head On photo awards.

If you’re keen to put Daisy & Maverick on your wall, prints are available online from Bluethumb Gallery.