From the courts of Queanbeyan Basketball Stadium to the conference rooms of the Women’s National Basketball League (WNBL), Christy Collier-Hill’s journey has been “pretty awesome when you think about it”.

We chatted to Christy, the Head of the WNBL, about growing up in Queanbeyan and how hard it still is to get any coverage of women’s sport in the media in 2022.

When did you start playing basketball?

I actually started playing netball first at around age four and basketball when I was a bit older, maybe seven or eight. My mum – Anne Collier – played and was involved in both of those sports locally, so we were always either at the netball or basketball courts growing up.

Playing for Roadrunners U12s, we went away to the NSW Country Championships and won! I think it was the first time a Queanbeyan team had ever won, and I got MVP of the grand final.

The Roadrunners U12 team – NSW state champions in 1989. Christy is front row, fourth from left, while mum Anne Collier (back row, far left) is the coach.

I played rep netball and basketball for Queanbeyan throughout all my junior years, before eventually moving to more social netball and focusing on basketball. I played in the U18 and U20 Australian Junior Championships for the ACT, and was lucky enough to spend a couple of years as part of the Canberra Capitals program as well.

Who influenced you the most in Queanbeyan?

I grew up in what I would say were the ‘golden years’ of Queanbeyan basketball. I had incredible coaches, including the likes of Jan Browne, Clive Rogers and of course, my own mother.

I really looked up to the older girls playing basketball for Queanbeyan, the likes of Belinda Todd, Sharon and Kate Fisher, and wanted to be just like them.

I had so many great teachers but a few that stick out to me are Mr Weir and Mrs Allen from Queanbeyan South Primary, and Mr Southwell and Mrs Marks from Queanbeyan High.

How the hell did you get the job as the Head of the WNBL?

I’ve been a sports nut pretty much since I first picked up a ball. While basketball and netball were the sports I really loved, I had a bit of a crack at everything, and loved watching pretty much anything. I think from there I knew I wanted to work in sport, so I went to the Uni of Canberra and studied a degree in Sports Administration.

I was lucky enough to land a job at Golf NSW which I worked in for seven years (was definitely not a good golfer, but at least looked the part on the course!), then moved across to Fitness Australia where I worked for four years. 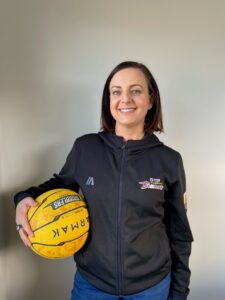 Before she joined the WNBL, Christy was the general manager of the Melbourne Boomers.

The general manager’s job at the Melbourne Boomers came up about three years ago and it deadset looked like the dream job. It was a job not just in basketball but in women’s basketball and I didn’t think I’d get it, but I did! So I dragged the family from Sydney down to Melbourne.

It was a dream job, and I absolutely loved it. Then the job for the Head of the WNBL came up (which I actually never thought would ever come up – I joked to my hubby that it’d probably never come up in my lifetime, but if it did, God I’d love it!)

I’d been doing some good stuff at the Boomers and so thought I’d throw my hat in the ring. Again, I was lucky enough to land it, and here I am.

What does your role involve on a day-to-day basis?

It really is incredibly varied. Today, for example, there’s been some issues management so I’ve met with the players association, a few player agents, and a few Clubs. Then an initial discussion with a network around broadcasting of the WNBL for next season. And a nice part of the job, reaching out to notify some of our award winners for this season. 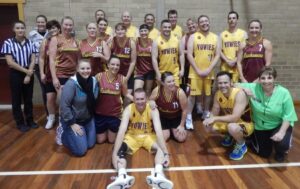 What’s the one thing you’re hoping to achieve in the role?

This sounds super cheesy, which is really not my style, but my vision for the WNBL is that it is absolutely the best women’s professional league in the country. By best I mean has the best broadcast coverage and viewership, great mainstream media coverage, strong commercially, and the most amount of members and fans.

It’s already the best product (clearly I’m biased – haha), we’re a global sport, and internationally the Opals are ranked third in the world so we’ve got a great base to work from.

In saying that, there’s a tonne of work to be done.

My job is to come in and grow the league in all areas. So while that’s technically more than one thing I want to achieve, that’s what I’m going with.

Do you think women’s sports are getting more recognition/respect, especially in the media?

There’s definitely been an increase over the past few years, but honestly, we’re still way off. On an average day, women’s sport receives 10% of all mainstream media coverage of sport.

We have to work very hard to get media coverage, whereas a footy player can sneeze and it’s back page of the paper! 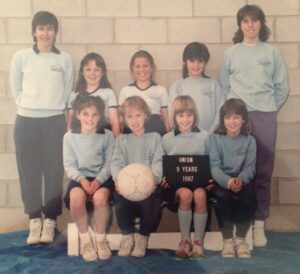 What advice do you have for Queanbeyan women aspiring to work in the sports industry?

There are now so many great degrees out there in sport – lots of universities offering them. So that would be the starting point. But also, whatever sports or organisations you’re interested in, make sure you reach out and make contact, even offer to volunteer. It’s a great way to get known and also get some experience under your belt.

Sport is such a big industry, and only getting bigger, so if that’s where you want to be and what you want to do – go for it.

I heard a rumour you were moving back to Queanbeyan?

Haha – not moving back yet, but who knows!

My entire family still lives in Queanbeyan and I do visit often. I absolutely loved growing up there, and for me it will always be ‘home’.

What do you reckon your mum (Anne Collier) would say about you scoring the top job at the WNBL?

When I got the job at the Boomers, my Aunty Deb Newham asked if I’d be able to get some free tickets to games. Told her I was pretty sure I could, haha.

From where I’ve come from – running around the local YMCA in Queanbeyan – to this role now is pretty awesome when you think about it. I know mum would be incredibly proud, and would also no doubt be giving me advice on how to run the show!