‘It doesn’t stop him from living life’: the awesome story of seven-year-old William Mclennan

‘It doesn’t stop him from living life’: the awesome story of seven-year-old William Mclennan

“He loves going to school, loves the Playstation and all the normal things that a seven-year-old would do,” William’s mum Naomi says.

This week he’ll be leaving Queanbeyan to be the youngest competitor at the 2022 APFA Powerchair Football Club Championship in Sydney. 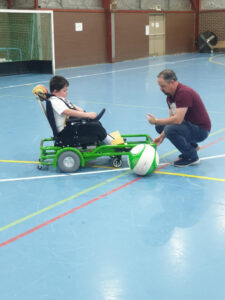 Getting some pointers from dad Ben.

Powerchair football/soccer is exactly what it sounds like: soccer but in a specially-designed powerchair, allowing players to manoeuvre an oversized soccer ball on a regulation-sized basketball court. The powerchair William uses for competing is worth a cool $16,000 and was donated by Queanbeyan Rodeo, who have continued to sponsor him on and off the court. 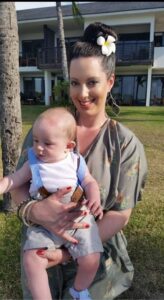 Figuring out why William was regressing wasn’t easy and took the Mclennan family down a long path of paediatricians and neurologists. Finally, blood and genetic testing at the Sydney Children’s Hospital gave them a diagnosis: Spinal Muscular Atrophy Type 2. 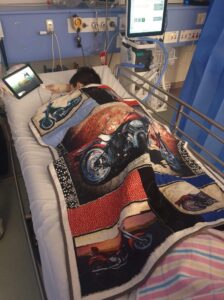 Mum Naomi describes it as “the childhood version of Motor Neurone disease.”

“It’s a neurodegenerative disease that eventually takes away your ability to walk, talk, swallow, and eventually to breathe,” she says.

“The majority of deaths are caused by respiratory complications like pneumonia.”

Although SMA has no cure there is ongoing research and treatment and support options available. William is currently prescribed the drug Spinraza, slowing the progression of the disease and targeting the SMN2 gene, causing it to make a more complete protein.

William’s powerchair football career has spanned almost two years and his skills in the local Gungahlin United team have led him to participate in this week’s event. 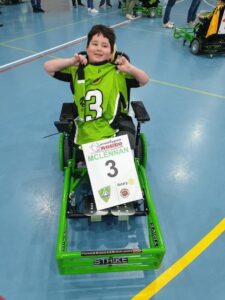 The eight-match Powerchair Championship fixture will be a round-robin style event, with William’s first game being hosted tomorrow.

“It’s a big big week for William, it’s going to be a great experience for him,” Naomi said.

She said it’s not just about the sport for their family, but also the social inclusion and awareness of access within the community.

“It’s a huge job to plan it – from accommodation and parking to making sure all the assisted technology and equipment they need is brought along.” 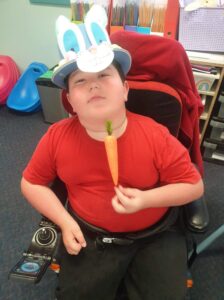 William showing off his hat at the Queanbeyan South Easter Hat Parade.

Naomi is a fierce advocate for William and volunteers her expertise on the QPRC Disability Committee.

The Mclennan family take William out into the community, not only to give him the same opportunities as other seven-year-olds, but also to highlight any areas that could be improved.

“We get William out on all the excursions and go to as many places as possible so that if we do find an issue we go and raise it and hope that the next kid that comes along doesn’t have the issues that we’ve had,” Naomi says. 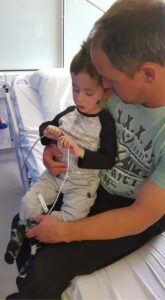 Hanging out with dad.

One area of frustration for the family has been the lack of options surrounding holiday care for William.

The YMCA building is inaccessible for William and his powerchair, and despite months of negotiations and promises, modifications to the building have yet to be made.

“I have to get support workers in every school holidays,” Naomi says.

“There’s all this red tape and bureaucracy wrapped up in it and I just want my kid to be able to go to holiday care and spend it with his friends and not be sitting in front of the TV.

“I’d rather him be with friends. I’ve sent numerous emails and it’s just falling on deaf ears.

“It drains a lot of his funding … he is in Year 1 and still not able to access school holiday care.”

Naomi had praise for the Reach Program at Treehouse that does provide inclusive holiday care three days per week.

“He attends and he absolutely loves it, he does also do some activities at the PCYC but again he needs a support worker.”

Looking to the future, Naomi and William’s dad Ben are determined for their son to have every opportunity to thrive and be happy. 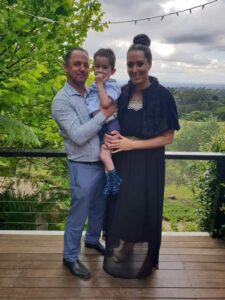 “I just want him to be himself and, if something is wrong, to be outspoken and resilient – which he already is,” Naomi says.

“I want him to be a strong little human being that cares for people that might be vulnerable or disadvantaged.

“Others with William’s condition live a normal life, they have families, they get married and have careers.

“Yeah he might be in a wheelchair, and he might have Spinal Muscular Atrophy, but it doesn’t stop him from living life.”