Whether you’re ready to take ‘car dancing’ to Justin Bieber to the next level or have a tiny person in your family who’s keen to try cheerleading, Bom Funk’s open day in Queanbeyan tomorrow is the chance to do both.

The dance studio’s brand new studios on High Street will be open tomorrow, Sunday 1 May, from 1pm to 4pm as part of the 40th annual Australian Dance Week.

It’s a chance to check out exactly how Bom Funk Director Kym Degenhart has transformed the former squash courts/Oddbods gym on High Street, as well as place your little ones in a cheer, ballet, tumbling, hip hop or jazz trial class. For those aged 18+, a Dance Fitness class will be held at 1pm. 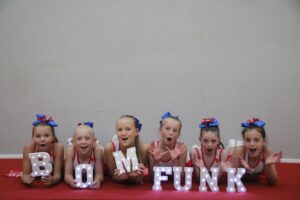 “Open day is for everybody and every body,” Kym says.

“But the open day is just the start of our Australian Dance Week celebrations – we also have a heap of adult classes during the week including cabaret, ballet, tap and even beginner hip hop for people to try later in the week.”

If you don’t already have a child dancing with Bom Funk, you probably know one: the dance studio has more than 400 students across Queanbeyan and Jerrabomberra. The brand new Queanbeyan HQ Studios on High Street opened at the end of January, and with five purpose-built studios and its own theatrette, it’s set to become a hub for dance in Queanbeyan. 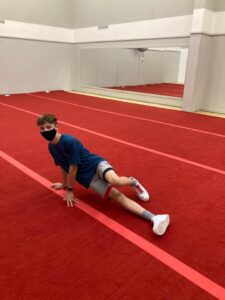 “Studios 4 and 5 can combine to create our own community theatre and event space: the Highlight Theatrette.

According to Kym, a former dancer with Paris’s Moulin Rouge troupe, hundreds of students choose to dance at Bom Funk because “we offer so much that’s unique to the region”. 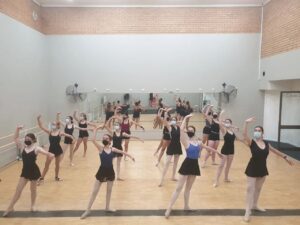 The senior ballet class at the new studios on High Street.

Classes at Bom Funk include Dancely, a program for little ones featuring original music and choreography from award-winning songwriters at Disney, Netflix and Marvel. The Positively Imperfect program supports girls’ mental health and wellbeing.

“We’re for people who love dancing recreationally as well as those who want to dance professionally,” Kym says.

“We have a huge performance squad for dancers who wish to compete at competitions and perform more frequently or even tour interstate and internationally.” 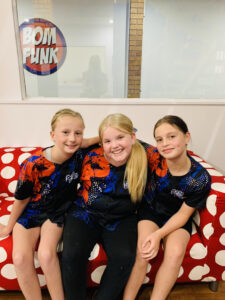 Teachers at Bom Funk include former Chicago and New York resident Amy Orman, once a singer with the Radio City Rockettes, and the studio’s aerial teachers have experience performing on cruise ships and theme parks. The Bom Funk ballet teacher performed principal roles in the Melbourne City Ballet.

“All of this experience along with education and teaching qualifications and a wonderful amount of passion is combined into the incredible dance community that we have at Bom Funk,” Kym says.