When you think of Queanbeyan rugby league in the 1990s a few names come to mind, but the likes of Asbock, Braun, Kawaleva and Doyle are top of the list. A fierce combination of Blues players that hasn’t really been seen since.

“If you’re born in Queanbeyan and play in Queanbeyan, you finish training and have a beer at the Toppy or the Tourist, that’s just part of playing,” says 1990s Blues player Adam Doyle.

Adam, the son of Queanbeyan football legend Mick Doyle, who coached the Raiders under 21s side to a grand final in 1989, has made it to an NRL club – but not in the way you’d think. He’s a recruiter for the Newcastle Knights, helping the team secure top talent and ensuring a vibrant future for the club. 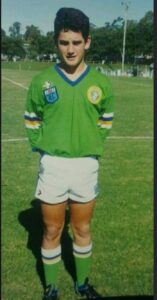 A young Adam Doyle played for the junior Raiders in the early 1990s.

Adam says playing footy in Queanbeyan was always on the cards for him.

“I’ve been playing since I was about three years old – I was just always around it,” he says.

“With Dad coaching the under 21s, I was always at Seiffert Oval with dad and Don Furner and all the boys, from day one I’ve always had a footy in my hand.”

While Adam’s junior team mates stayed in Queanbeyan and went on to be successful in local football, Adam’s representative playing skills saw him signed by NRL club Manly at the age of 16. 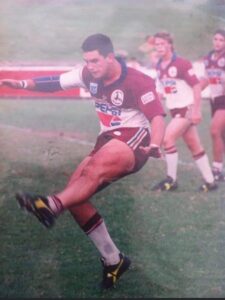 Leaving behind dad Mick, mum Gay and siblings Renee, Shawn and Josh for the big smoke wasn’t easy for the 16-year-old.

“I got signed by Manly in 1992 – Bob Fulton signed me to Manly so I moved in with him and his family,” he says.

“Mum wouldn’t let me go to Sydney unless I was with a decent family.”

Living with the Fultons left an indelible mark and would no doubt be in the back of Adam’s mind when he later started recruiting young players himself.

Doyle moved on from Manly in 1997. He had a stint at the Western Suburbs Magpies and from there played in the English Super League for UK club Warrington. After returning back home to Q-Town for a couple of years, Adam had to figure out what life after playing professional football looked like. 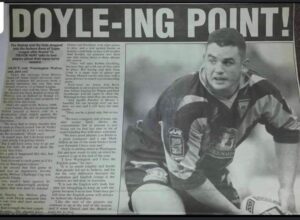 He moved to Wollongong to take up a role at Pacific Sports Management under infamous NRL player/manager Gavin Orr, whose roster of players now includes the likes of Daly Cherry-Evans and Josh Addo-Carr. While in Wollongong, he studied youth and residential care.

“I ran programs for five or six years for a program called ‘Life Without Barriers’ – I initially worked in the houses with young people and then moved into a management role.”

Doyle’s connections within the NRL led him to a role in recruitment for the Newcastle Knights.

He now lives in the small central coast town of Terrigal, where Gay and Renee also live.

He reckons years of watching and playing footy in Queanbeyan – and around the world – has given him a keen eye for scouting young talent. Adam recruits for SG Ball, Jersey Flegg and the NSW Cup, the Knights Reserve grade and all of the club’s girls programs within the NRLW. His recruits are generally locals aged 15 and up. 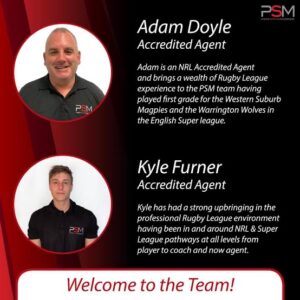 Adam has worked hard to get a job with within the NRL but says if he had his time over, he would give his own playing career a harder crack.

“If I did it again, I’d train 10 times as hard … these days we have a gym worth like 40 million and 50 odd staff supporting the players, they have every resource, the gym the pools … and if you’re an athlete an and you’re powerful and fast, we’ll teach you to play footy, you’re more of a chance than a smaller skilful ball player.”

Adam is proud of some of his recruits over the years. Tom Gilbert, who now plays for the North Queensland Cowboys, and Knights halfback Jake Clifford were both cherry picked by Adam. He notes the importance of keeping local juniors within their area and communities, giving them the hometown advantage with family support systems and knowledge of the area. 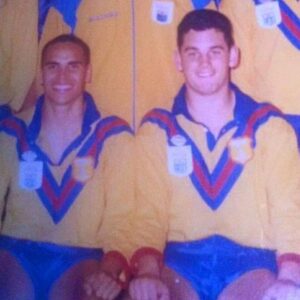 “You can’t beat sport in local towns,” he says.

He even recently recruited Queanbeyan athlete Matt Beckenham’s nephew, all the way from the small town of Scone, NSW – gotta love a Queanbeyan connection!

Looking to the future, Adam says he loves his gig at the Knights but if the Raiders made him an offer, it’d be hard to refuse.

“It doesn’t feel like going to work … I’ll stay here as long as I can.

“I love Queanbeyan – growing up there was nothing like it, and now still being friends with your friends from Kindergarten, I’ll definitely move back there one day, it will always be home.”