Queanbeyan farewelled an icon on the weekend with the passing of Terry O’Callaghan (Tex / The Cowboy). In the days since, we’ve had the privilege of being in touch with Terry’s family and what we’ve learnt about him has blown us away.

We thought we’d share some facts about Terry with you.

His dad Denis was a Prisoner of War in WWII.

Which is why Terry proudly marched in the Queanbeyan Anzac Day parade most years, wearing Denis’s medals. Denis was in POW Stalag V11B after being captured in Crete on 1 June 1941. He was in the camp for four years.

Denis died in 1970, which had a devastating effect on the young Terry.

He was born and grew up in New Zealand. 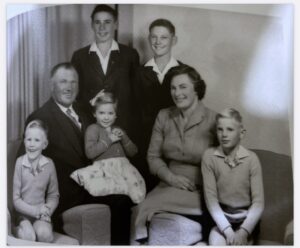 Terry Gordon O’Callaghan was born in 1953, the fourth of five children to Isabelle and Denis O’Callaghan.

Terry grew up on a 600-acre farm named Green Valley in North Canterbury, Culverden, New Zealand. He moved to Australia in the early 1980s, telling his mum he wanted to become a millionaire opal mining in Coober Pedy. The family thinks he never quite made it to Coober Pedy, instead basing himself on the east coast of Australia.

They do know he lived in Mullumbimby, NSW, for many years before making his way south to Queanbeyan in the late 1990s. They have no idea why he wanted to move to Queanbeyan!

Terry’s last visit to New Zealand was in 2017 for the funeral of his mum, Isabelle, which was the last time most of his family saw him.

He’s from a family of incredibly high-achieving siblings. 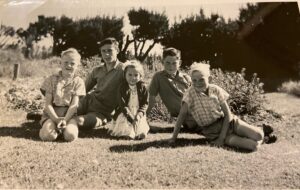 Kevin was an excellent golfer and built his own golf course in New Zealand, becoming a professional golf coach. He died in 2005 from melanoma.

Barry lives in Brisbane and works as an electronics engineer, while Sharon is still based in New Zealand and works as farm and dairy genetics consultant. 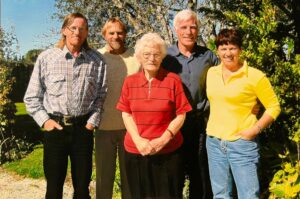 Terry (far left) on a trip to New Zealand in 2005 with Barry, mum Isabelle, Michael and Sharon.

Terry loved to garden. Even as a small boy in New Zealand he would be weeding the garden and planting vegetables. Mum Isabelle was an avid gardener. Part of the reason Terry loved Queanbeyan so much was because of the gardens. He loved wandering around town and analysing the work people had done in their gardens.

Coffee was his guilty pleasure.

Niece Carley Weston says he never asked for anything. “When we’d visit we would offer to buy him food and smokes but the only thing he ever asked for was expensive coffee,” Carley recalls.

He has a huge family. 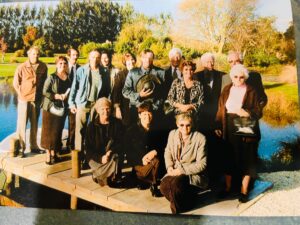 Terry (centre, holding his famous hat) with his extended family.

While he was always walking around town on his own in Queanbeyan, the truth is Terry had a big family who kept in touch and loved him to bits. Terry has 15 nieces and nephews and 21 great nieces and nephews, based in New Zealand, Australia and the US.

He was fascinated by the ideas behind nuclear fusion.

Including the design of early tokamaks – devices used in nuclear fusion research for magnetic confinement of plasma. Barry recalls that as a teenager, Terry had some fantastic ideas about how to redesign the machines and even did drawings of how it would work.