Growing up in Queanbeyan with three brothers – Jerekai, Aliki Jnr and Joseph – Kaden says his parents always encouraged him to value education.

“My dad always told me that if he could go back and do high school again he would,” Kaden says.

“And that’s just something that always stuck with me in the back of mind and now I try to say it to my little brothers as well.” 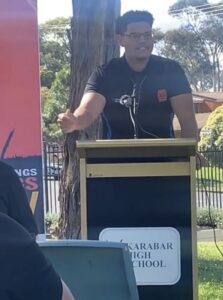 After successfully completing the HSC in 2021, Kaden says, “I was a little bit bummed out about leaving school, I was the complete opposite to my friends, they were keen on leaving, and I was like, I love school.”

“Around Years 7, 8 and 9, I was more of a rowdy kid and class clown and didn’t really care about assessments,” he recalls.

The Clontarf Foundation, a school-based initiative aimed at improving education and employment outcomes for Aboriginal and Torres Strait Islander men, really helped him.

Kaden says he owes a lot to the program, which now has 138 academies throughout Australia. Each academy works on the life skills, self-esteem and discipline of young Indigenous men, through a mentor-style program.

“Clontarf came in when I was in Year 10 and gave me a more of a mature eye to look at things from a better perspective,” Kaden says.

“Tom the director was like a mentor to me … and to be honest I don’t think I would have finished Year 12 if it wasn’t for Clontarf.

“It’s a foundation that really helps Indigenous boys through school academically, and to better help them join the workforce when they leave school.” 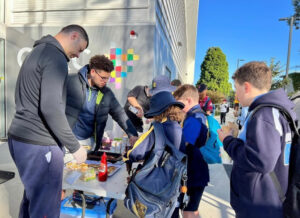 According to Kaden, Clontarf’s incentive program offers boys in the program ‘chips’ for their efforts.

“Chips is a bonus that you have to earn – you have to have more than 80 per cent attendance, and get certain grades on your assessments that have to be handed in on time.

“So it doesn’t really come easy and I know I missed out on a few chips because I slacked off a bit.”

Moving into employment, Kaden wanted the opportunity to work within the Indigenous community and provide opportunities for young people to connect through culture. He successfully applied for a job at Queanbeyan Palerang Regional Council, working in Community Programs.

“Kaden’s position is an ‘identified’ position for community development, so he’s not only working with the Indigenous community but the community as a whole,” says Community Program Coordinator Terry Campese.

“It’s a new role we created within council to give people opportunities and career paths within the Queanbeyan community – because we’re right next door to Canberra and the public service, we’re trying to get young people to stay local.” 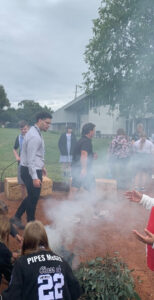 Part of Kaden’s role at QPRC includes implementing programs aimed at building cultural awareness and relationships. Fit Together is one example of a cultural program Kaden works on; it’s run by the PCYC on Friday afternoons.

“We pick up primary school kids from all the schools in the area – South, West, Public and East,” Kaden explains.

“We take them to the PCYC and run around and play games … we’ve started to introduce some culture, like drawing symbols and signs.

“We’ll play games that are Indigenous-related or divide them up and do Men’s business and Women’s business, stuff like that has never really been done in this town.

“I was never involved or introduced to anything like that when I was their age, it’s pretty cool that now they get the opportunity to do that and be part of that.”

Kaden attends an Indigenous playgroup and the Queanbeyan Family Daycare playgroup each week, inspiring children with cultural and Indigenous activities such as art and music. He says he’s proud of being able to give back to his community and looks forward to what he can achieve.

“At the moment I’m just taking it day by day, I’m keen go up the ladder at council and take on more important roles and responsibility – I just really want to give back to the community,” he says.

“My whole family is proud of me – to be in a position like this where I can influence kids and make changes in the community makes my parents and grandparents proud of me.” 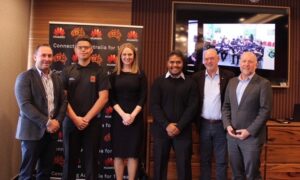 “We’re working on our Reconciliation Action Plan (RAP) at the moment, and we’re lucky enough to have a current and a former employee of Reconciliation Australia on our council,” he said.

“We’ll work on a plan that’s much more action-focused and with an achievable timeline.”

The Reconciliation Walk planned for tomorrow (Tuesday 31 May 2022) has been cancelled due to wet weather. A ceremony will still go ahead in the Queanbeyan Bicentennial Hall at 10:30am and all are welcome.