No internet, no mobile phones and a torture activity called roll call sport. Here are the big differences between attending QHS now and in the 1990s. 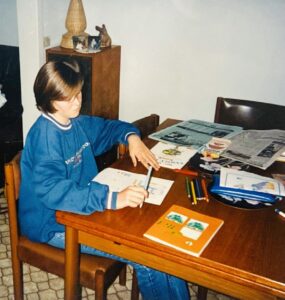 Doing my homework at the dining room table in 1993.

When I started high school in 1992, the internet didn’t even exist – well not at school, and certainly in our humble three-bedroom home on Agnes Avenue. It wasn’t until 1996 that the Winchester family finally got a computer. It took up residence in our dining room no less. Alta Vista and Ask Jeeves were life changing. Before that, you couldn’t search what was on TV, or what the weather was going to be. I’d have to get up every morning and go outside to see how cold it was to determine whether to wear my QHS spray jacket or not that day. 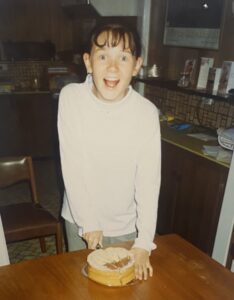 My typing skills as a high school student were non-existent (but my handwriting was on point), whereas my 15-year-old daughter (who is now herself a QHS student) just sat her entire NAPLAN testing online.

I’d have to visit obscure staff rooms to find a teacher to hand in assignments, immaculately presented (except for the whole bottle of whiteout I’d used) on that lined A4 paper with folder holes, paper-clipped together with a nice cover page (or in a plastic sleeve if it was a HSC assignment). My daughter just presses “submit” on Google Classroom – she’ll never know the pain of finding a pen that works in a household of four children. 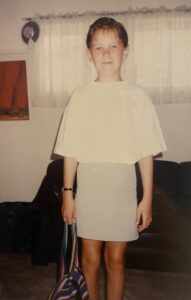 My first day of Year 7. Why is my face white when my legs are so brown?

This may come as a surprise (it did to me) but the fashion is almost the same.

While fake tans, fake eyelashes and bushy eyebrows were not a vibe in the 1990s – leggings, claw clips and baggy jumpers definitely were. The hair is definitely more flat and straight now but baggy jeans are back in a big way.

The QHS uniform hasn’t changed much since the late 1990s, but some are lucky enough to remember the tight grey pencil skirts of the early 90s, (see pic of Year 7 me above if you’ve forgotten). Thank God we were allowed to wear Stussy pants by the time I hit Year 8. 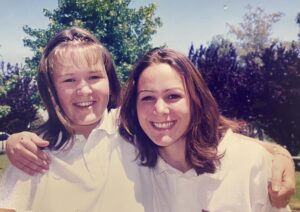 Me and my bestie Tina Risteski in 1994. Clearly thin eyebrows were a thing.

Every Wednesday afternoon was sport for QHS students in the 90s, and the highlight was that it was off-campus. That meant at the start of every term you chose a sport, and if you were like me and your last name was at the end of the alphabet you chose last (and usually missed out on the cool sports like ten pin bowling).

On occasion they would start at the end of the alphabet and I would go first, only for my friends to change their mind and leave me stuck doing badminton while they were roller skating.

In these days of strict litigation and duty of care, the sports now happen at the school – broken up into smaller sessions across most days, so no walking to Maccas or cruising around Queanbeyan with that one friend that had their Ps. I feel like my daughter is missing out on so much, but she has the bonus of never knowing the hell that was ROLL CALL SPORT.

Obviously we had a landline. Shared by six people. Imagine. The phone was in the kitchen so if you wanted to plan something sneaky you had to do it during school hours.

There was a calendar and a notepad next to the phone – super important to write down events, phone numbers or what time hockey training started, and if Mum needed a pen while she was on the phone – Lawd help us all. Call waiting was the best and worst thing invented and if you had an answering machine, you were definitely posh. 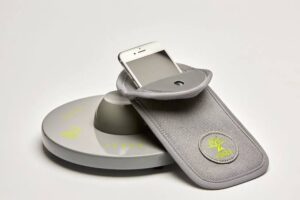 The Yondr case that QHS students have to put their phones in before school.

I’d have to turn up to QHS every day not knowing if my friends were away sick, what mood they were in, or what they were wearing that day. If you couldn’t find your friend in the quad at lunch, you had to look for them, on your own. You were just out there winging your whole life at 13 years old with no updates or constant stream of Snapchat messages – what a time to be alive.

I even recently had to explain to Miss 15 what a phone book was – she was mortified that everyone had access to your address!​ 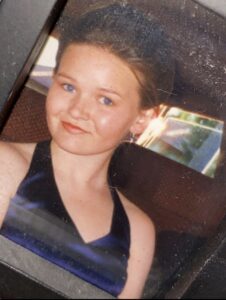 Year 10 formal pics has to be taken WITH A CAMERA.

My 15-year-old is under the strict new rules of a”Yondr  pouch” – a pouch you have to put your phone in at the start of the day. It gets locked when you walk in the gate and unlocked when you leave the gate at the end of school. Some might call it a dictatorship, others praise it for encouraging the children to focus on their schooling and not on watching Tiktok in class. 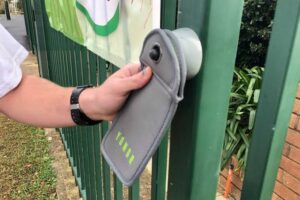 In the 90s a very low, hip-height fence was all that separated you between attending class or heading down Agnes Avenue for a durry. The teachers’ car park in Surveyor Street didn’t have a fence or gate so walking straight out was the easiest option, but only if you wanted to risk the eagle eyes of Mr Mavec, who always seemed to be watching from his J block lookout.

Lunch passes were the only legitimate reason to leave the school, and I’d use my personal lunch pass for me and 10 friends to head down Agnes Avenue to my house, watch Rikki Lake and eat toast in front of the fire. These days the huge fortress that surrounds the school means the only way in and out is through the front gate, which to us 1990s kids would have been akin to being held in Alcatraz. 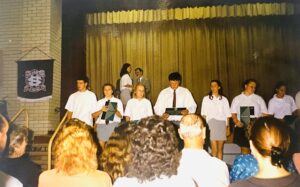 My daughter started high school in 2020. Since then she has missed a lot of school (and that’s not including a broken finger, toenail removal and a tonsillectomy).

Obviously remote learning was implemented but the inconsistency of it all, the breaks from face-to-face learning and being at the school with her friends has had a huge impact on her academically and socially. Even now the amount of time spent in the school quad because of teacher shortages is every other day.

I had no concept as a teenager of face masks or hand sanitiser – Glen 20, what the heck was that?! I dusted my room with a feather duster. The only pandemics I had lived through were a bad hair pandemic and a Boyz II Men pandemic which lasted a decade and where I locked myself in my bedroom listening to The End of the Road … but I guess it’s really not the same.