Even if you don’t believe in the supernatural, this is an intriguing story.

Alice Street, Queanbeyan, resident Kevin Chamberlain was walking past a room at the back of his house in May when he saw something small and white in the middle of the room. It was a photo – laying face down – of a woman and man. It was in incredibly good condition, given it appeared to have been taken in the 1960s.

“I can only assume it was hidden in some nook or cranny and was somehow dislodged,” Kevin says. 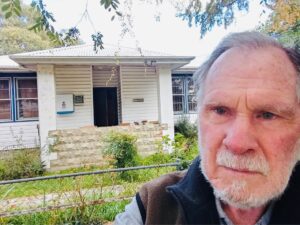 Kevin and his home on Alice Street.

Kevin posted the photo of the mystery couple on Facebook, on the Queanbeyan Community Notice Board page, with the heading: “HUGE MYSTERY”.

More than 75 comments, 25 shares and 267 likes later, a resident of Alice Street tagged Mary Ileris (nee Kourtis), who had lived in Kevin’s house with her family before it was sold to the Chamberlain family in 1973.

The photo brought tears to Mary’s eyes. It was her aunt Velika and cousin Aleksandar, taken at their home in Skopje, Macedonia, in the late 1960s. It was likely sent to Mary’s mother, Despina Kourtis (and Velika’s sister) in a handwritten letter, updating Despina on life in Macedonia. Despina, now in her 90s, was shown the photo on a mobile phone and cried tears of happiness and sadness at the same time. (Velika died of breast cancer only a couple of years after the photo was taken.) 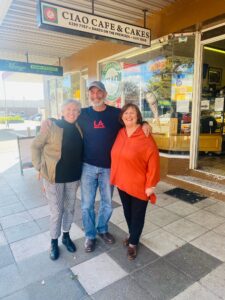 The Kourtis siblings: Mary, Leo and Christine, grew up on Alice Street.

“Thanks for posting the photo,” Mary wrote to Kevin on Facebook.

“It has brought back great childhood memories. Queanbeyan was a great place to grow up.”

With the initial mystery solved, Kevin shared more memories from his Alice Street house with the Kourtis family.

“You might be interested in this drawing on the wall in the garage,” Kevin wrote, posting a drawing of a house and trees that Mary had created as a child. He also shared “graffiti in a slab of concrete in the driveway” that showed the Kourtis family’s names – mum Despina, dad Arthur, brother Leo and sisters Christine and Mary. 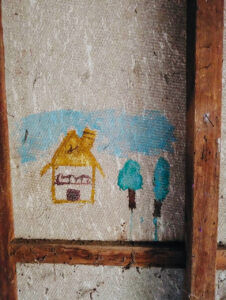 Mary’s drawing (on the wall in the garage) was likely drawn in 1971.

“These photos are unbelievable Kevin. Thanks so much for these amazing reminders of my wonderful childhood,” Mary replied.

The property had five owners between the late 1800s and the arrival of the Kourtis family from Greece in 1965: Arthur George Arnold, a carpenter of Queanbeyan; Elias Southwell, an ‘Agent’ of Queanbeyan; Arthur Thompson, painter of Queanbeyan; George Joseph Phillips, grazier of Anembo, and The Hume Pipe Company. 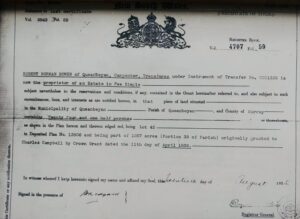 The Kourtis family and Kevin Chamberlain met at Ciao Cafe last week so Kevin could pass on the actual photo of Velika and Aleksandar, and the group could share wonderful memories of living on Alice Street. Among the stories was how dad, Arthur Kourtis, built a fence around the front of the property so that the residence was suitable for Kevin’s sister, who was blind and had a guide dog. 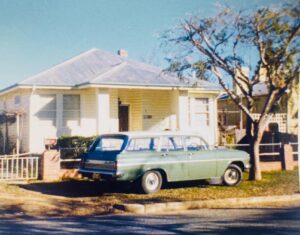 The house in the mid-1970s when the Chamberlain family bought it.

The Kourtis siblings reflected on being an immigrant family in Queanbeyan the 1960s and 70s, learning a new language and adapting to the Australian lifestyle. Kevin recalled how Southern European immigrants changed Queanbeyan for the better.

“Suddenly there were all these new children at our school, they looked different, they spoke differently and had different food, but everyone got along – it was wonderful,” Kevin said.

While Kevin and the Kourtis family will never know how the photo mysteriously appeared on the floor decades after it was mailed to the house (Was it Velika’s way of saying hello? “Maybe,” Mary says), it has united the past owners and brought back beautiful memories of each of the family’s time at the house.