Jerrabomberra fighter Beau Hartas on mullets, 2619 and his next ‘very dangerous’ opponent

Jerrabomberra fighter Beau Hartas on mullets, 2619 and his next ‘very dangerous’ opponent

Former Jerrabomberra resident Beau Hartas is keen to get back in the ring after a serious cycling accident saw him sidelined.

“I hit a log and went over the handlebars – no helmet on or anything and I broke my collar bone,” he says.

“I’ve got a plate and eight screws in it now and that’s holding it together pretty well.” 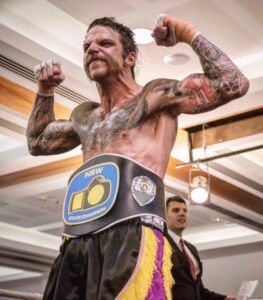 “I’m a mumma’s boy – my mum and dad split up when I was young, and I have an awesome relationship with my dad, but everyone wants a tough name for boxing so I thought I’d go with ‘Mumma’s Boy’.

“It stuck, everyone loves it.”

Beau is keen to pull on the gloves for his upcoming match early next month after his cycling accident and COVID lockdowns saw him out of the ring for two years. The World Title fight will be hosted on Saturday 2 July at the Gold Coast Convention Centre, with Beau competing in the middleweight division, which requires him to to weigh in at just under 72.6 kilos.

“I’m doing pretty well, I’m waking up only a couple of kilos off it and I’ve got four weeks to get there,” he says.

“I’m just feeling happy and healthy and really really fit, probably the fittest I’ve ever been.

“I train in the mornings with Chris Georgiani on Tuesdays and Thursdays at S7 gym in Beard – he’s doing my strength and conditioning and then I do boxing and sparring in the afternoon.”

Beau’s opponent Isaac Hardman, aka “Headsplitter”, has a formidable reputation for throwing punches and words. Isaac’s pre-match altercation in March, which involved a throat grab of fellow boxer Michael Zerafa, was caught on camera and made national headlines. Beau said he’s not intimidated and plans to take Isaac head-on in July. 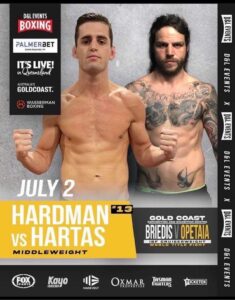 “He’s very dangerous, a lot of people don’t want to fight him because he’s a big puncher,” Beau says.

“But I was originally going to fight him two years ago and he’s been on my hit list ever since.”

A plumber by trade, Beau has worked for the past 17 years for D-Group, one of Canberra’s leading civil, hydraulics and construction management firms, and says they’re massive supporters of his.

“They look after me, [D-Group owner] Dino, he’s coming up for the fight and he sponsors me and everything.”

But Beau hasn’t forgotten his roots.

“I grew up in Jerrabomberra, I was there for about 22 years in Walker Crescent, near the little shops,” he says. 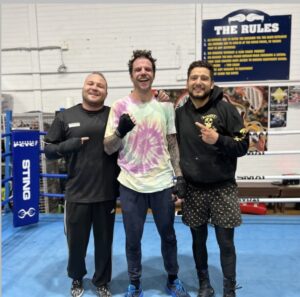 His mullet was a Jerra icon, attracting lots of compliments, but he had to forego fashion for practicality.

“I got rid of the mullet now and just have the rat’s tail, it got too hot under my headgear, but I had to leave something I couldn’t get rid of all of it,” he laughs.

“I have pretty thick hair so it was always a hot mess, it’s much cooler now.”

A proud father to six-year-old daughter Stella and 18-month-old son Charlie, Beau says the boxing bug is already catching on.

“Stella comes to training with me every day and plays with the kids there and has the best time,” he says.

“Charlie walks around the house punching everything at the moment, he’s going to follow in dad’s footsteps one hundred per cent, he’s cute as … and he’s already got a natural mullet.” 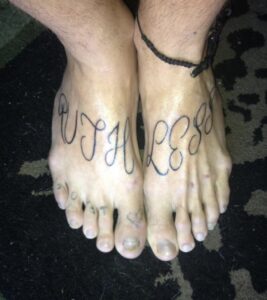 His approach to boxing can be described in one word, which he has tattooed on his feet.

Beau says he’s grateful for his local supporters and he can’t wait to fight for them all.

“I’m so thankful for all the support, all my sponsors and fans have been amazing and I’m so grateful to Capital Fight Show’s Nick Boutzos for getting the show on … there’s nothing better than the rush you get in the ring, all the excitement and all the feelings, that’s what keeps bringing me back for more.”