At age 12, Christian Marchetti is already one of the world’s best futsal players

At age 12, Christian Marchetti is already one of the world’s best futsal players

Twelve-year-old Queanbeyan resident Christian Marchetti has out-skilled hundreds of other players to make the Under 12s Australian Futsal Team, travelling to San Francisco next week.

The Year 6 student at Queanbeyan East Public School has been playing soccer since he was a toddler, and is a mad supporter of Italian team Juventus. 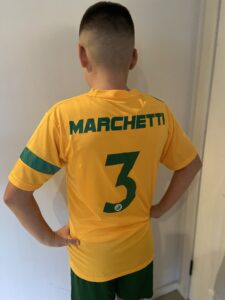 Christian in his Australian team uniform.

If you’re wondering about the difference between futsal and indoor soccer, futsal is played on a hard court and mainly indoors. It’s played between two teams of five players each, one of whom is the goalkeeper. Unlimited substitutions are permitted. 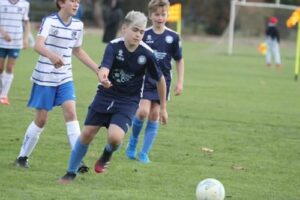 In action for Under 13s Belconnen United.

Unlike other forms of indoor soccer, futsal is played on a hard court surface marked by lines; walls or boards are not used. It’s played with a smaller, harder, lower-bounce ball soccer.

The surface, ball and rules favour ball control and passing in small spaces.

Christian started playing futsal as a three-year-old and now plays for Belconnen United Premier League’s U13 team. He successfully trialled for the under 12s ACT team early in 2022, giving him the opportunity to play against other states in a round robin style comp in Brisbane. 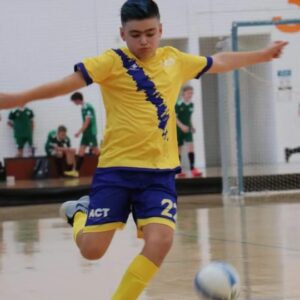 Christian representing the ACT at the Australian Nationals.

Talent scouts watching picked Christian to play for Australia – the only player picked from his age group in the ACT.

“When we got back to Canberra we got an email saying that he made it into the under 12s team,” Sarah says.

“Around 500 kids trialled and it comes down to a squad of eight or nine, so it’s a minimal squad that gets picked out of so many.” 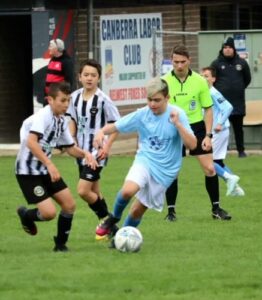 Christian’s family and friends are “beyond excited”.

Christian leaves for the United States next week for two weeks and is taking dad Johnny Marchetti along for the trip of a lifetime.

“They start at Under 12s and work their way up to the Under 20s adult competition, they’ll play other countries from around the world in a big tournament.”

Christian accepts the trophy on behalf of U12s Belconnen United, who were northside competition champions.

Sarah says Christian is heading to San Francisco with a mixture of excitement and nerves as there are sure to be international scouts watching from the sidelines.

“This is a good opportunity for him to really show what he can do,” she says.