The diagnosis of a positive case of Leptospirosis in a dog in the Queanbeyan-Palerang region has vets on high alert and residents of the region facing long waits in an attempt to get their dogs vaccinated.

According to a Queanbeyan-Palerang Regional Council (QPRC) media release, the dog suffering from the disease had not visited any of the known affected areas like Sydney, Newcastle, the south coast and surrounding areas. The dog source of the infection is as yet unknown.

Leptospirosis is a bacterial disease of humans and animals. It is caused by Leptospira bacteria that are excreted in the urine of infected animals including mice, rats, cattle, pigs and dogs. If left untreated, Leptospirosis can be fatal. 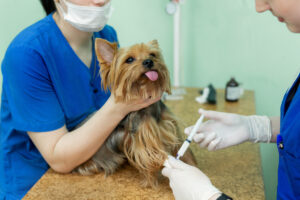 QPRC went public with advice to “vaccinate your dog as soon as possible” earlier this week. As a result, local veterinary clinics and hospitals have been overwhelmed. The Queanbeyan West Veterinary Hospital released the following statement on its Facebook page yesterday:

“[We are] doing our absolute best to fit all our patients in where we can to receive their Vaccination against this disease, whilst also leaving availability for sick pets needing our assistance and other urgent emergency case.

“Until your dog is able to be vaccinated, consider the following information in assessing your pet’s risk of exposure. Rodents, which shed leptospires in their urine, are considered to be the reservoir host, although a number of species can be affected including cattle, sheep, goats, pigs, dogs and horses.

“Dogs can be exposed via contact with infected urine and/or stagnant water. Risk of disease increases following periods of high rainfall.” 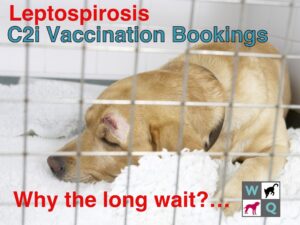 The hospital also reported via Facebook the following case numbers: “Jerrabomberra (1 case), South Coast (3 cases) and the Newcastle region (4 cases) are the areas most recently reported, with the Central and Northern Beaches of Sydney being areas previously associated with infection.”

Dogs can contract the disease when playing in, or drinking, contaminated water such as ponds and puddles. Symptoms to look out for include, but are not limited to:

Council’s Animal Management team is on the lookout for symptoms in any dogs that pass through the council pound facility.