Greg Leahy is known around Googong for his expert gardening skills – but he’s working on growing something much bigger. Greg recycles bottles and cans to fund the education of poverty-stricken women and men in the Solomon Islands.

Currently an emergency department nurse at The Canberra Hospital, Greg first spent time in the Solomon Islands in 2005 as part of the Civilian Australian-led RAMSI Mission. The mission aimed to support the Solomon Islands government to restore law and order in the islands, and put the country on a path to economic stability. It included support from the AFP, New Zealand and the South Pacific Islands. 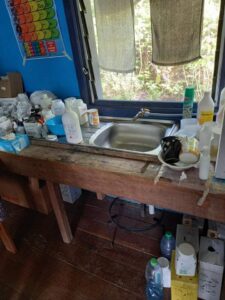 Medical treatment areas are a little different in the Solomons.

Greg did five tenures altogether during the peacekeeping mission as an employee of Aspen Medical Services.

“I was over there as a primary health care nurse, helping the GPs in the clinic,” he says.

“It was when the riots were going on in the Solomons – when their Prime Minister got in contact with John Howard and said, ‘We really need help, because it’s just out of hand.'”

The Solomon Islands remain one of Asia’s poorest countries with a shocking 84.5% poverty rate. Most residents earn less than $5.50/day. Schooling is not compulsory; as a result, there are low enrolment rates; less than 60 percent of children go to primary school. 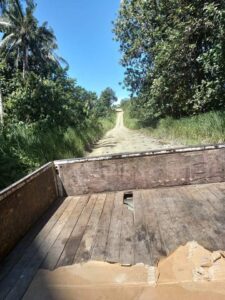 Students from the Solomon Islands Education Project travel to incredibly remote locations to assist with healthcare.

During one of his tenures in the islands, Greg’s co-worker Trevor Wallace, who was volunteering at the local St. Joseph’s school at the time, introduced Greg to a young girl named Mirriam Chukua.

“Trevor corresponded with me saying that Mirriam might not finish school because it looked like her mum couldn’t afford for her to continue,” Greg says.

“A lot of kids don’t go to school, their parents are farmers and sell fruit at the markets and it’s a very poverty filled place.

“Mirriam’s dad had died and her mum was very poor, so I would send her money for soap and rice, so they could bathe in the stream outside the village.”

In 2015, after seeing a need for better education opportunities for Mirriam and so many other young people, Trevor and Greg were inspired to set up The Solomon Islands Education Project, sponsoring young women and men to complete their nursing diplomas.

“It’s a very friendly place, but there’s a lot of corruption with the government and a lot of people suffer,” Greg says.

“While I was over there, there were a lot of school-aged kids that wanted to study nursing.

“So we came up with a way to fund that study.”

The Solomon Islands Education Project takes on six to 10 students at a time. Students must show commitment and determination in their studies and also be from families who otherwise could not afford to pay for the study. 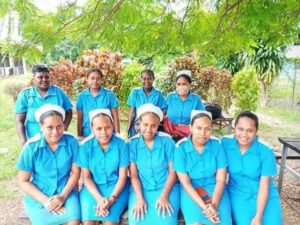 The current intake of students at the Solomon Islands Education Project.

For the past four years, Greg has been fundraising primarily through the collection of cans and bottles from local Googong residents, raising close to $30,000 for the project, providing tuition, accommodation and travel for nursing diplomas.

“Everyone in Googong is so supportive. Mirriam actually joined the Googong Noticeboard Group [on Facebook] so she could see that people are supporting her and the other students.

“She often sends me messages to say that she couldn’t have done it without us.”

Mirriam at the beginning of a five-hour journey in the back of a truck to get to her clinical placement.

Mirriam is due to graduate in August and has made it through her nursing studies under the toughest of conditions, having to travel sometimes for days to remote villages to undertake practical placements with limited resources.

“She’s passed everything, and she wasn’t the most academic student, but she tried so hard and she passed,” Greg says.

“And now she’ll be a registered nurse. When she gets a job she can work in the Honiara hospital or one of the villages.” 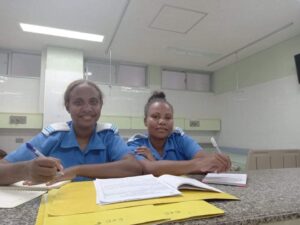 Greg hopes to help more students and improve healthcare in the Solomon Islands through the continued support of Googong and region residents.

“It’s a great initiative and it just makes a difference to people’s lives. It reinforces how lucky we are to live in Australia.”

To contribute to the cost of a nursing degree for a resident of Solomon Islands, donate to The Solomon Islands Education Project: https://wra.org.au/1720nursing?fbclid=IwAR2JlDgClHrDwmu8GR1zpIGdR5Q1xoAJFE_wOyyuNZBVSIeOoW4wlV8hwr