Nala the cat goes missing after murder threat in Googong

Nala the cat goes missing after murder threat in Googong

In May, a Googong resident took to the Googong Noticeboard group on Facebook to post a picture of an ominous warning her cat Nala had returned home with.

Tied to Nala’s neck with a zip tie was a handwritten note:

“YOUR CAT DOES NOT BELONG ON MY PROPERTY. WRITE YOUR ADDRESS HERE … IN CASE I CATCH IT ON MY PROPERTY AGAIN, I CAN RETURN THE COLLAR.”

The note implied that if Nala was caught by this person again, there would be no cat to be returned, just her collar. 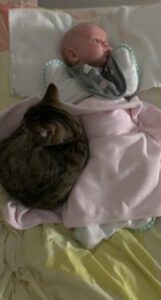 Nala with her littlest owner.

The threat deeply troubled the owner, who said in her Facebook post that if the threat was carried out, “There will be three devastated children”.

Most people who saw the Facebook post sent responses of empathy, but the original poster, who wishes to remain anonymous, said she received “private messages saying what a nuisance cats are and that I should keep her inside”.

Two months later – in July – Nala’s owner posted again in the Googong Noticeboard group on Facebook: this time to say Nala was missing. 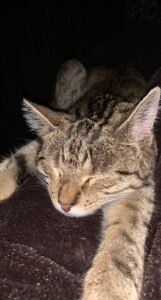 Nala’s owners are hoping for the miracle return of their tabby.

“Nala has been missing for a little bit now, a little while back she received a threat and since then we have done our best to keep her inside, however, she has managed to escape,” the owner wrote on Facebook.

One Googong resident commented: “I hope she turns up and that she’s ok. To the person who made the threat: you are an absolutely horrible person. I remember the note you attached to this cat’s collar. If you have hurt this cat, you don’t belong in a lovely community like Googong. Good people don’t hurt other people’s pets.”

In May 2021, Queanbeyan-Palerang Regional Council introduced a strict cat containment policy to all newly-developed areas west, south and east of Googong. The policy won’t be enforced in the established areas of central and north Googong until 2026. 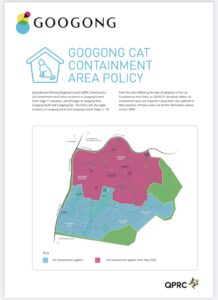 While Googong is passionate about protecting native wildlife, developer of the suburb PEET states on its website: “A Googonian cat is an indoor cat.”

The website warns that cats found in areas zoned for ‘environmental conservation’ may suffer dire consequences.

“Cats found in these areas are likely to be controlled by rangers (shot, captured, or poisoned through fox baiting),” the website says.

“Additionally, cats roaming onto neighbouring private properties face danger of being controlled by the land owners (especially via shooting and baiting intended for foxes).” 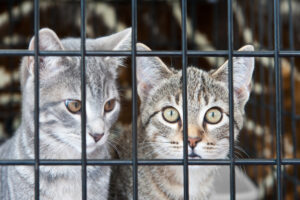 The owner of missing cat Nala describes her as “a short haired tabby that we adopted from the pound – so she was used to being outside”.

“We have only had one complaint before but that was a face-to-face and just a ‘hey your cat has been chasing birds’ complaint,” the owner says.

“In December 2020 she was unfortunately hit by a car and had to be operated on, so after that we tried to keep her inside but she became very anxious and destructive so we made the choice to allow her out again.” 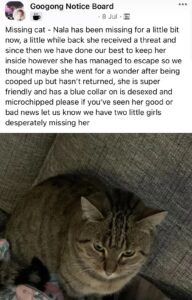 While Nala didn’t live in the cat containment area and has gone missing around the central/pool area of the Googong township, many believe she should have been kept inside regardless.

Nala’s owners remain clueless as to who threatened and potentially killed their family pet, and still are hoping for a miracle return of their tabby.